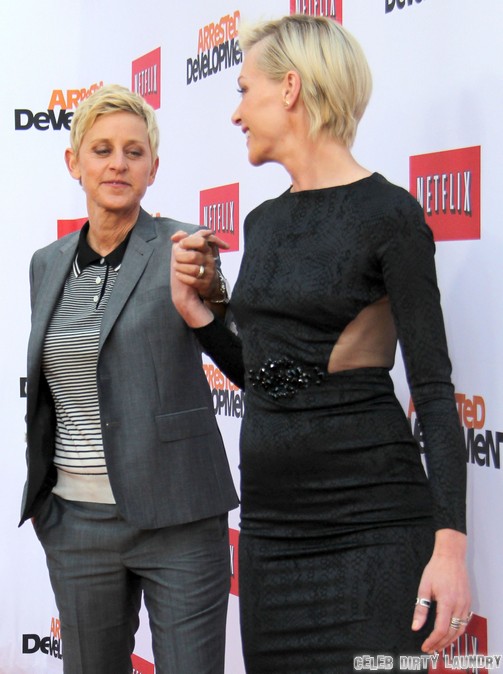 According to the latest report of the National Enquirer, Ellen Degeneres and Portia de Rossi are fighting over other women, with jealousy ‘ripping them apart’.

After watching Ellen’s shows for years and hearing what everyone in Hollywood has to say about her, it’s hard to believe that she would ever be so petty and insecure. However, she and Portia did just sell their ranch in Thousand Oaks where they both lived. I mean, they’re probably moving to another house somewhere else, but if there is any truth to these rumors, the sale might make sense.

In all honesty, this is a story that probably has a .01% of being true, if only because Ellen and Portia are one of the very few couples in Hollywood that seem stable, happy, and proud of it. Also, if there were other women involved, where would either Ellen or Portia have met them? Ellen works incredibly hard on her show, and Portia’s career has been insanely busy in the last year, with films and the last season of Arrested Development.

I mean, I don’t doubt that there’s some minor jealousy involved – if there is a basis to the story. It’s humanly not possible to never, ever get jealous and both Ellen’s personality and Portia’s good looks are sure to draw in admirers, especially since they’re both famous. Considering how often Portia and Ellen are in the limelight, there might have been a couple of times they flirted or hung out with other women – as do most couples. But to fight about it seems to be a silly reaction that I just don’t associate with Ellen or Portia.

What do you guys think about Ellen and Portia supposedly fighting? Let us know your thoughts in the comments.