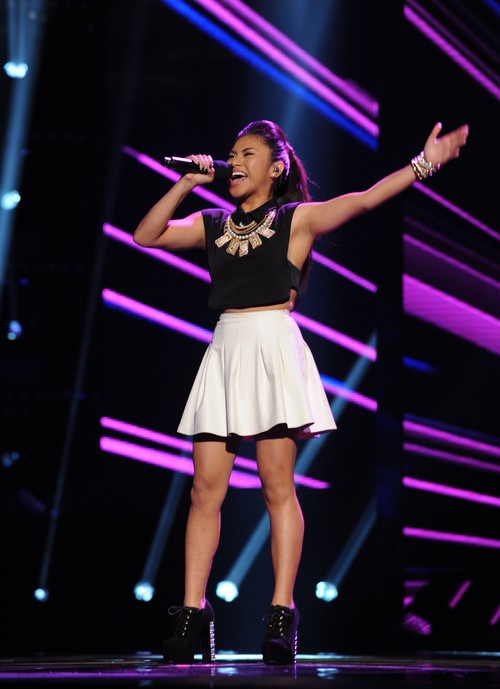 Ellona Santiago took the stage  on THE X FACTOR USA for her Top 10 live performance and British Invasion Night.  Ellona sang “Burn” by Ellie Goulding. On tonight’s show the top 10 performed live in front of coaches Simon Cowell, Kelly Rowland, Demi Lovato and Paulina Rubio for America’s vote and to make it to the coveted “Top 8.”  Did you watch tonight’s performance show? We did and we recapped it here for you.

Judges’ comments: Kelly said, “Your voice is just so big for you little body.  I think that with you, you always bring something to the stage, this week something was missing.”  Paulina said, “You are my favorite, you have a great voice.”  Simon said, “There is no question, you are a brilliant performer.  However, it is like at the moment I am watching an actress.  Next week, you choose the music, cause right now you are a dancing, singing puppet.”  Demi said, “I disagree with Simon, you killed it and were fantastic.”

If you want to see Ellona make it another week, you have to vote for her.  Ellona took her twitter today to ask her followers to vote, she tweeted, “GOOOOOOD MORNING! XFactor is on tonight at 8pm on Fox. PLEASE VOTE FOR ME”