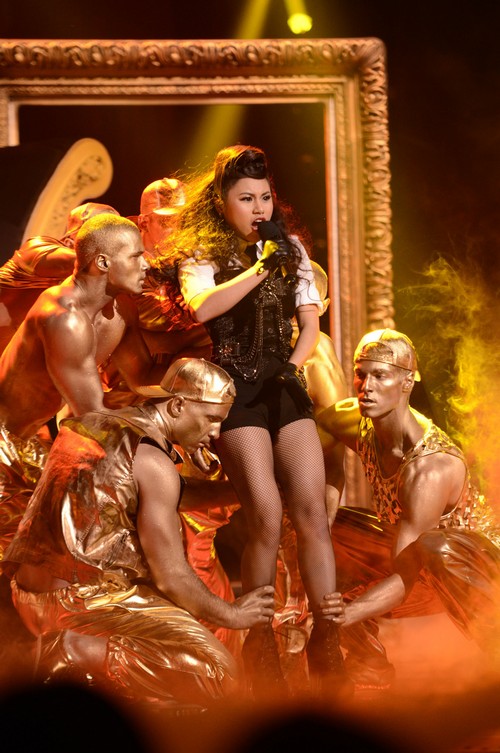 Ellona Santiago took the stage  on THE X FACTOR USA for her Top 6 live performance and Diva Week.  Ellona Santiago sang “If I Were A Boy”  by Beyonce for her second song. On tonight’s show the top 6 performed live in front of coaches Simon Cowell, Kelly Rowland, Demi Lovato and Paulina Rubio for America’s vote and to make it to the coveted “Top 5.”  Did you watch tonight’s performance show? We did and we recapped it here for you.

Judges’ comments:  Kelly says that she has such a big beautiful voice and like the parts where she actually soften the tones because her voice has so many levels which she should explore more. Paulina says she feels like she’s watching a super star; she loves how passionate and her delivery was perfect. Simon says this is exactly what he wanted from her since the beginning and felt it was one of his favorite performances so far from her. Demi says that she is so happy to be her mentor and that she deserves to be in the finals. If you want to see Ellona Santiago make it another week, you have to vote for her.

On last week’s show Ellona Santiago performed “Mama Knows Best”  by Jessie J – Kelly said: “That was your best performance since you have been here.”  Paulina said: “I am a big fan of yours and I love that you are in command.  You are a superstar.”  Simon said,  “I did not say you were a Muppet, I said you were a puppet last week.  This week it was a game changer.  Next week lose the dancers.  You are an incredible singer, fantastic choice of song.”  Demi said, “Ellona  I could not be more proud of you.  Your story touched so many people, I  am really really thankful for you.  I agree with Simon, you could win this competition.”