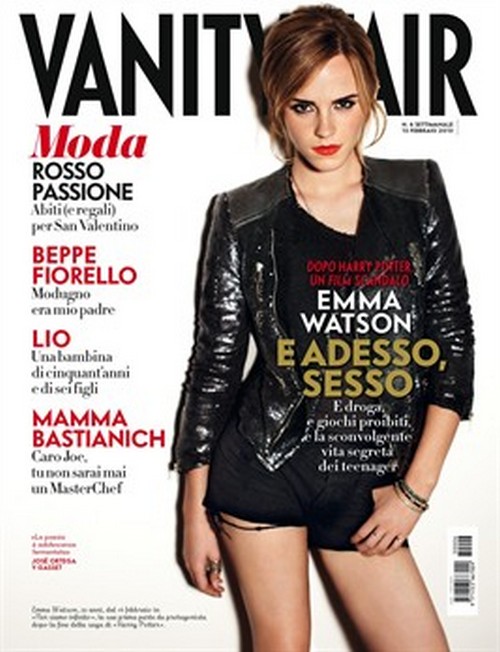 Kristen Stewart’s had her fair share of supporters over the whole Robert Pattinson–Rupert Sanders cheating scandal, but we never though Emma Watson would be one of them.  Emma’s always been one of the most level headed actresses out there, and we’ve seen her grow up to be a classy young lady.

So why is she defending Kristen Stewart cheating on her boyfriend with a married man?  In a new interview with Vanity Fair Italia, Emma discusses the affair and the ensuing aftermath, saying, “Those who criticized her are the same people that think that being rich and famous is like being covered in some kind of magic powder that makes life perfect: Nothing can go wrong in your wonderful world. For these people, Kristen deserves all the bad things that have been thrown at her because she had an amazing life and she ruined it.”

She adds, “Kristen is human, just like everybody else, and she’s so young. Everyone makes mistakes, everyone. It’s not fair to consider them matters of public interest.”

So I guess when Kristen released a public statement to PEOPLE MAGAZINE, the magazine that CATERS to celebrities and is pretty much the epitome of ‘public interest’, it didn’t count?  I mean, it’s clear that Kristen and Emma seem to have bonded more than we thought during their little gathering at the Toronto International Film festival, but you don’t see others who were also there jumping to Kristen’s defense in this matter.

Of course, despite how much she covers it up in interviews, Emma Watson does have a slight tendency to do the whole ‘pity me, I’m a celebrity’ shindig.  She has gone on the record and talked about how much she hated growing up in the spotlight, and although it seemed as if she was adjusting to the fame a little bit more recently, it looks like she still has strong feelings about it.  While there’s nothing wrong with that, these actors and actresses need to realize that they are CHOOSING to act, and no one is forcing them to do it.  Emma can easily retire from the spotlight, and just do a couple of indie films a year, or even quit acting completely.  Voila, no public attention.  However, she chooses to do big roles [and don’t deny it – Warner Brothers’ adaptation of ‘Beauty and the Beast’ is not a small movie in shape or form, and neither is the upcoming Noah], and then complains about public attention.  Something she has in common with Kristen Stewart, clearly.  We expect better, Emma… we expect better.