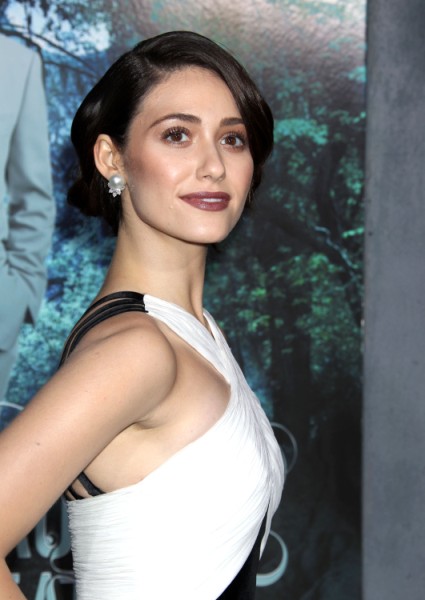 I don’t understand why every new fantasy love story franchise that comes out has to be touted the next Twilight. There are no sparkly vampires or muscle-hungry werewolves in Beautiful Creatures yet the cast is being asked about Kristen Stewart and Robert Pattinson’s blockbusters in virtually every interview. It’s got to be annoying. I think Emmy Rossum agrees me with because it sounds like she veered off the game plan when she spoke to a journalist during promotions. When asked about the similarities between Twilight and Beautiful Creatures Rossum responded, “[Beautiful Creatures] is very different and it’s empowering for women. A lot of the female characters were able to decide for themselves who they are going to be and what they are going to do with their lives.”

Them’s fighting words, no? So she didn’t come out and say Twilight or Kristen Stewart encouraged women to get back into the their 1950s kitchen but she insinuated it, yes? And is she wrong? Hells no. Even Kristen and Rob thought Twilight sucked but they had to pander and sell it for the studios. It always annoyed me when Kristen went on about how strong Bella was. Bella is easily one of the most worthless heroines in all of literature – if you allow Twilight to be considered as such. Sorry Twihards. Bella is no Hermione Granger.

Emmy probably should get a slap on the wrist for speaking off script though. She probably should have started the quote with something like, “Both movies have great story lines that people love blah blah blah….” Pissing off Twihards isn’t the best way to get that teenage demographic in the seats. But I kinda like Emmy Rossum right now so I’ll give her a pass. I’m obsessed with her show Shameless and she’s really impressed me with her willingness to play a gritty girl from Chicago’s south side. And I didn’t hate Beautiful Creatures as much as I hated Twilight. It’s not the best book and definitely no Hunger Games. It’s pretty obvious actually but it has some redeeming qualities and (relatively) strong female characters is one of them. I might go see it. OK, I probably will. It’s Valentine’s Day after all and I’m a sucker for high school romance!

Do you consider the Emmy Rossum/Kristen Stewart/Twilight comment a dig or was it just awkwardly worded? Have any of you out there read Beautiful Creatures? Do you think it empowers women more than Twilight?