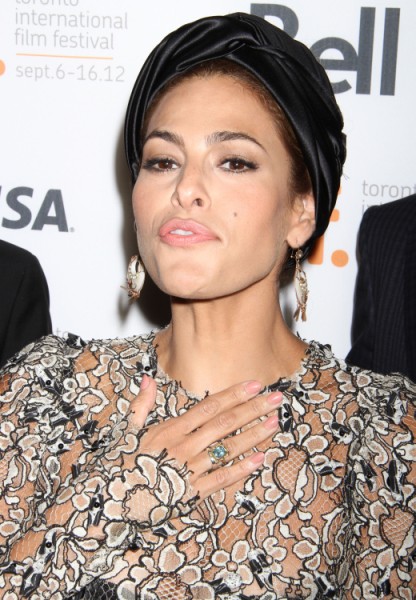 At this point does it seem like Eva Mendes cares? The tabloids are running wild with stories about her insecurity over Ryan Gosling. I suppose it’s stemming from the fact that they’ve been out and about lately promoting their new movie and Rachel McAdams just announced her break up from Michael Sheen. But does this kind of nonsense irk her? She always comes out looking the worst and the underlying sentiment is that Ryan should be with Rachel. That must suck, right? You all know where I stand on this but still… it must suck to have the majority of the public think your hot boyfriend is better off without you.

So what’s a girl to do? Win an Oscar! Eva Mendes is apparently killing herself over her career and thinks going for the ultimate prize will keep Ryan interested. According to The National Enquirer, Eva is desperate to impress Ryan and has signed up with super agent Hylda Queally. Apparently she’s all about having a career like Jessica Chastain, Cate Blanchett and Marion Cottilard. Well so does every other girl in town.

Eva’s afraid that her sexiness is going to keep holding her back though. Yes, because Marion Cotillard isn’t sexy as all hell. Bitch please. You’re the girl who plays the hot girlfriend in movies. You know the one. She’s usually walking around in her underwear half the time. Ryan knew that when he first got with you. If he can’t handle the fact that his girlfriend’s a sex object then that’s his problem – not hers. I understand a woman creeping up on 40 probably wants to reinvent herself and make something happen but I cannot understand a woman creeping up on 40 not knowing who she is. You’re the hot chick. Own it. You get decent work. But Jessica Chastain you are not. Let’s not play.

Is the Ryan Gosling/Rachel McAdams issue really causing Eva Mendes this much stress? And even if she tried her damnedest, is an Oscar in Eva’s future? Anything’s possible, right? But we also all know about the Best Actress curse. If you don’t then just ask Halle Berry, Julia Roberts, Reese Witherspoon and Sandra Bullock. It kills relationships. Perhaps Eva’s not greedy though. Maybe Ryan will be content with a supporting nomination!