Eva Mendes Nervous Ryan Gosling Wants To Get Back Together With Rachel McAdams! 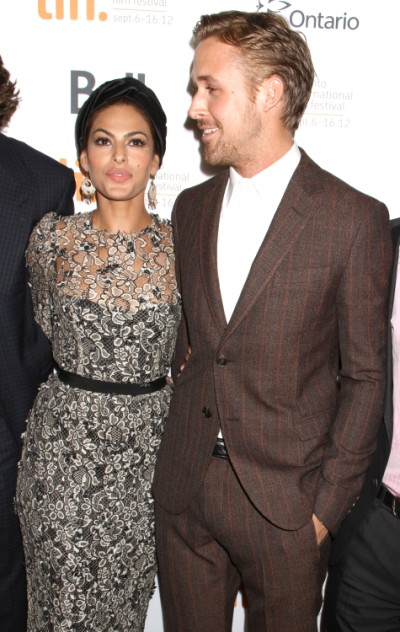 You can’t fault the tabloids. They’re just writing what we all want to read on this one. Were any of you kinda sorta put out when Rachel McAdams announced she broke up with Michael Sheen but then secretly kinda excited because you thought she could get back together with Ryan Gosling? Why do we do this to ourselves?! They’ve tried it – a couple times – and it never works. Sure they blamed their busy careers before and Ryan just announced he’s going to be taking a long break. I’m not going to lie  – after he said that I immediately assumed he’d start making babies with Rachel. Ugh, stop! It was one movie and it was years ago! Why does it have this hold over me – over us?? Oh, we know why. It wasn’t over. It still isn’t over! And Eva Mendes knows too which is why, according to Star magazine, she’s nervous she’s going to get dumped soon.

It sounds like Ryan reached out to Rachel after the split to offer some sympathy and that ticked Eva off so much she wrote a letter to Rachel’s team telling them to keep Rachel away from her man. Is it because she wears turbins? Eva Mendes looks like a stone cold bitch most of the time. Is this why she isn’t good enough for Ryan and we believe she’s capable of this jealousy? I blame the turbins.  I mean, come on, Rachel and Ryan’s names both start with R; they’re Canadian AND they were even born in the same hospital. Fate called and said it wanted them back together.

But why is Eva Mendes nervous? Last I heard she and Ryan were tight – super tight. She walks his dogs (it’s the dog theory again!), hangs out with his mother and has been shacking up for awhile. There’s really no reason to fall for the Ryan Gosling/Rachel McAdams back together stories. Only… only… we can’t help ourselves.

I wasn’t going to do this to you. It’s not fair. But just as 9/11 taught us never to forget the atrocities done to our country we must never forget this happened a few short years ago. I wasn’t going to do it. I’ll probably ruin you for the rest of the day. But I can’t help myself because this happened. And life was good. Try to get your work done after watching it! And have a great weekend watching The Notebook! You know it will be on TNT or TBS or something like that!