Robert Pattinson Moves Back In With Kristen Stewart After Trial Separation 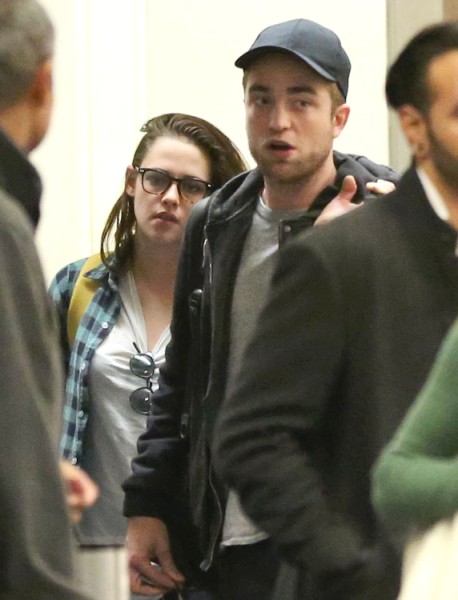 Trial separation? What trial separation? Kristen Stewart basically just gave the media the finger (which she really likes to do) because not only is her boyfriend back in town but he’s back at her place. After weeks of speculation that Robsten was dunzo for realsies this time around Robert Pattinson came back from Australia with a bizarre haircut straight into Kristen waiting arms. He just can’t quit her!

“Rob is living at Kristen’s. He considers it his home, Kristen’s there, their dogs are there and most of his stuff is there — that is whatever is most important to him. He considers Kristen’s home, his home too. I guess his home is where is heart is. And right from the get go Kristen made it clear that it was also his home,” a source told HollywoodLife. “Again they have been inseparable since Rob’s gotten back. I think the distance did them good. Rob isn’t showing any signs of needing any sort of space from Kristen, that’s for sure.”

I just threw up in my mouth a little bit. Wait. OK, I can move on now.

I blame the whole Robert Pattinson move back in idea on the dogs. Have you ever shared a dog with somebody? Have you ever been so pissed at that person but had that anger evaporate the second you watched your dogs go nuts around him? It’s a killer and super hard to stay mad when they make your dogs so happy. Don’t get dogs unless you’re committed for life. Just saying….

So, space worked? Absence made the heart grow fonder? Or was the heart always fine and Rob just wanted a break to concentrate on his movie?  That makes more sense to me. Rob isn’t exactly known for his stellar acting so maybe he used those 6 weeks down under sans Kristen to focus on his game. Who knows? All we do know is they are back and spending a lot of quality time together which is what people who haven’t seen each other in awhile do. But you know what else they do? They spend all that time together and think to themselves, “Man, being alone wasn’t so bad. It was actually kinda fun.” And then the wheels are at work. I wonder if Rob is having any of those nagging thoughts….

Are you surprised by the Kristen Stewart/Robert Pattinson living together revelations? Does he even have a home in LA? He has to throw his shit somewhere. I’m telling you it’s the dogs. I’d put up with most people just to see my dogs.