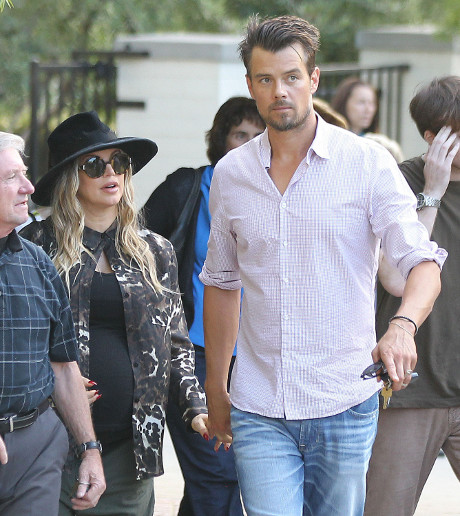 We reported earlier that Fergie and her husband, Josh Duhamel, went into the hospital to begin preparing for a scheduled c-section. Well, the news is out . . . . Fergie and Josh have welcomed a perfectly healthy boy into the world. The baby clocks in at 7 lbs 10 ozs and they’ve named him Axl Jack Duhamel. Reportedly, the inspiration for the kid’s first name comes from singer Axl Rose.

TMZ reports: Fergie’s rep tells TMZ, Axl Jack Duhamel was born healthy this morning at 7 pounds 10 ounces. Fergie underwent a c-section procedure at an L.A. hospital — and as we reported, the 38-year-old singer will be recuperating in style, staying in one of the V.I.P. suites famously used by celebrities like Kim Kardashian and Dwight Howard. The name doesn’t feel like a coincidence … you’ll recall Fergie performed the Guns ‘N Roses hit “Sweet Child O’ Mine” at the 2011 Super Bowl halftime show.

We’re so excited for Josh and Fergie and wish them both a happy and healthy time with their new baby joy. We’re really glad they released the name ASAP. We couldn’t have handled another delayed celebrity baby name announcement. We’re still waiting for pictures to be released of Axl, but we have a feeling they’ll be popping up on their social media accounts within the next few days.

Happy recuperation, Fergs! Are you surprised by the name? It’s not that strange, is it?