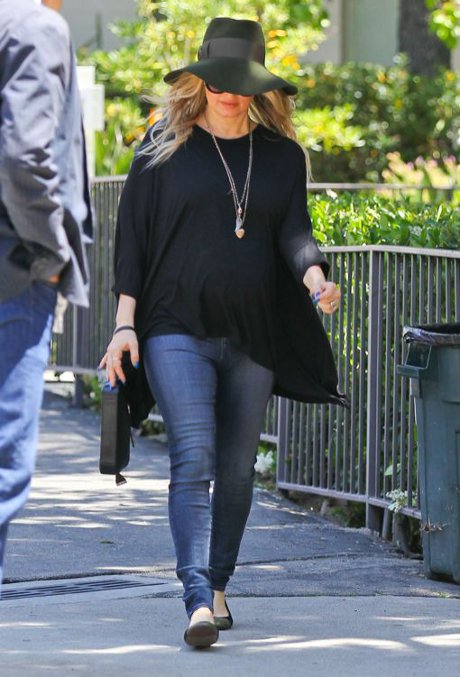 Fergie and Josh Duhamel are expecting their first child together, and Fergie has already started showing. She revealed her baby bump in a flowing black top when on her way to Sunday church service. Fergie first announced she was expecting in February and from the looks of the pictures and the size of her baby bump, she looks to be in her second trimester.

Her hubby Josh is also not filming anything right now, although he’s rumored to be going back for Transformers 4. Since this is their first child together, he will probably be by her side throughout the next few months. Fergie and Josh were also recently spotted looking for houses together in Pacific Palisades.

The Black Eyed Pears are also taking a small break while Fergie is pregnant, but they are said to be recording their seventh studio album together later this year.

What do you think of Fergie’s baby bump? It’s clear that she understands maternity fashion [unlike, ahem, certain reality stars], and she looks absolutely fantastic. Do you think Fergie will be one of those celebrities that will be giving magazine interviews before and after her birth, or will she stay under-the-radar about the pregnancy and birth? So far, she’s been very private, only revealing her baby bump in public very recently.