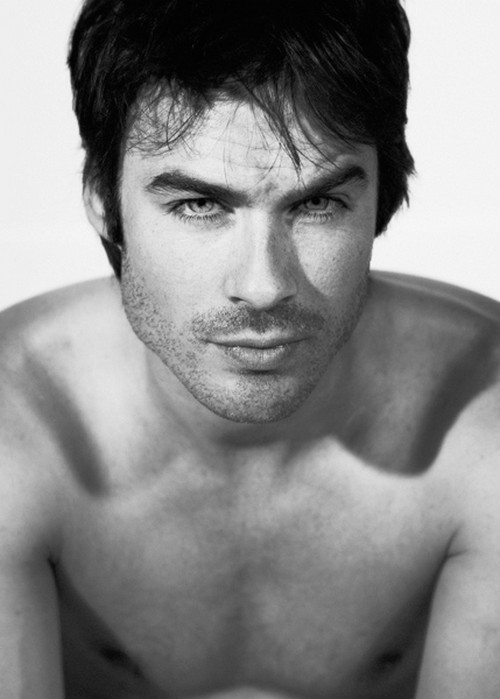 Ian Somerhalder is going to extreme lengths to land the role of Christian Grey in the upcoming Fifty Shades of Grey movie. The actor who is said to have been in talks with EL James on numerous occasions for the part, is currently facing tough competition from Robert Pattinson who hosted a party two weeks ago at which the famous author just happened to attend.

According to reports, R-Patz and James were discussing their upcoming projects where talks on casting for the Fifty Shades adaptation was said to have been the hot topic; no word on whether or not Robert was actually approached with an offer but it had the media buzzing. This had Ian fearing he had already lost out on what could have been his biggest project to date. Why else would he be stripping off naked in a bathtub?

Isn’t it funny how just after one week when rumors started swirling around Pattinson could potentially land the role to play Christian Grey, Ian gets completely naked for a photoshoot that doesn’t happen to be used for anything. Yup, you heard correctly! Had this been for a magazine shoot, or an endorsement deal it would have been understandable.  But the fact that the photos are merely another Somerhalder vanity project makes it look like a desperate last minute attempt to be considered to play Mr. Grey himself.

The photos are supposedly being used for photographer Butch Hogan’s portfolio. Need we say more? If those pics were only meant to be used as a portfolio, why in the world would they be released for the public to see? Clearly there’s more to the story than we think; the feeling of losing out to Robert, Henry Cavill, or Matt Bohmer is killing Ian inside. He doesn’t want to be stuck on a crappy network like the CW for the rest of his life, and besides from The Vampire Diaries, Ian doesn’t have any other really big projects lined up.

The 34-year old isn’t stupid, he’s seen the doors a big blockbuster movies can open for an actor. It worked for Robert Pattinson: he landed dozens of endorsement deals including his latest one with Dior, and made a whopping $60 million from all the Twilight movies.  Ian will have to work as Damon until he is a senior citizen to make close to that.

And on top of that, Ian has been doing a whole lotta talking on hopefully being picked to play the overtly sexual character. Somerhalder says: “One can never get bored of people asking about a huge project. Everyone has to realize every guy in Hollywood is up for this role. It could be anyone – that’s how that goes.” Umm… more like “Hey, look at me, look at me! I’m naked in a bathtub to convince EL James I deserve this role the most.”

Don’t be surprised if Ian ends up releasing his own sex tape to try and convince EL James he’s right for the role. The guy is a complete nutter!