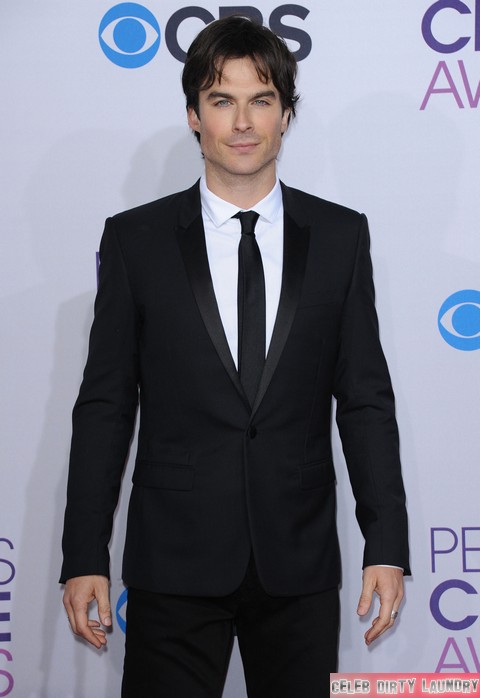 I think one of the reasons that women love Ian Somerhalder so much is because he comes across as a sturdy guy. A little rough and tumble at times and when you combine that with his piercing stare, we’re gone. But just last week Ian proved that even a guy’s guy like himself can use a bit of pampering, when he was spotted getting a manicure. The actor looked like it was the most normal thing ever too.

We’ve been watching this guy for months and chomping at the bit for anything connected to him possibly being cast in Fifty Shades of Grey. Look at his pics below from the People’s Choice Awards – he is definitely trying to look like Christian Grey. The primping seems a bit new for Ian, but it does make sense for a character like Christian Grey. In the book Mr. Grey is all about power, perfection and control. His grooming is usually meticulous by design. If Ian is seriously gunning for the part then now is as good a time as any to whip himself into his own vision of what Christian would look like and I’m betting that includes perfect hands.

In order to win the coveted role he needs to not only carry himself as if he owns the character but he’s going to have to be a perfect fit from head to toe. Obviously this guy has a bit more going on than he ever publicly acknowledges. Just this past weekend he teased on Twitter about reading a new script and it made us wonder here at Celeb Dirty Laundry if it’s THE script for Fifty Shades.  It would kind of make sense now wouldn’t it? Reading the script, working out in his head how he would approach the role, doing little things to look the part. It all lends itself to the idea that perhaps Ian is a little more invested in snagging the part than he chooses to let on!

Would Ian make a great Christian Grey? Tell us your thoughts in the comments below!