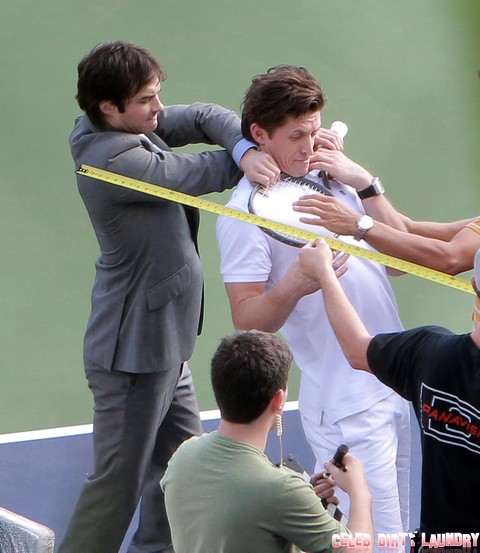 Sweeter words were never uttered! Hollywood sex gods Ian Somerhalder and Matt Bomer have long been fan favorites for the upcoming role of Christian Grey in the movie adaptation of the hit trilogy, Fifty Shades of Grey. While both are worthy candidates, Ian seems to have a leg up—and it doesn’t hurt that he’s all over Twitter, teasing fans with Fifty Shades related tweets. We told you that, not only did he auction off his signed copy of the book, he’s reading a ‘movie script’ while on set, and we’ll give you one guess at which movie! Honestly, we thought that Matt was politely bowing out of the Christian frenzy, but yesterday he and Ian got into a marvelous public brawl, and we can’t help but think it was Fifty Shades fueled!

Yesterday, Ian and Matt competed on opposing teams for the Seventh Annual Celebrity Beach Bowl, sponsored by DirecTV. The flag football game is played in sand, as a pre-Superbowl celeb bash for charity. Matt was on the white team with Ian’s girlfriend Nina Dobrev (also rumored to be gearing to play Anastasia Steele), while Ian joined forces with Neil Patrick Harris. Yesterday we told you about the sexual chemistry and flirting pounding back and forth between Nina and Ian—but we were too distracted by the couple aspect that the Christian Grey side of things slipped our minds!

We’d like to think of this game as an unofficial duel for the role—especially since Ian’s blue team won the game, 43-42. Of course, it was all in good fun, but that doesn’t lessen the thrill of watching a field full of Hollywood hotties wrestling and tackling! The game did a lot of good for Nina and Ian, who exchanged some uncharacteristically flirty tweets! “This one is going to go up in my dressing room,” Nina tweeted, sharing a photo of her jersey. “Turning pro?” Ian asked her playfully. Nina also shared a pic of herself and Lil Wayne, captioned, “Losers and still smiling- doesn’t matter, we’re still wining :) It was a close game! Love you @liltunechi.”

Ian was also starstruck, joking, “Sometimes you get photo Bombed by Neil Patrick Harris . . . Awesomeness,” along with a photo of king NPH sticking his tongue out. Ian is also keeping his jersey, and showed it off with the caption, “Nawlins Darlin!So happy to be home and have this . . . laissez les bon temps Rouler!” (That’s ‘let the good times roll,’ though I don’t think the idiom holds in French!) Ian and Nina may be Hollywood’s cutest couple—they keep it all so lighthearted and fresh! Would you love to watch them discuss Non-Disclosure Agreements and handcuffs in Christian Grey’s penthouse apartment? Or is Matt better equipped to play the BDSM king?