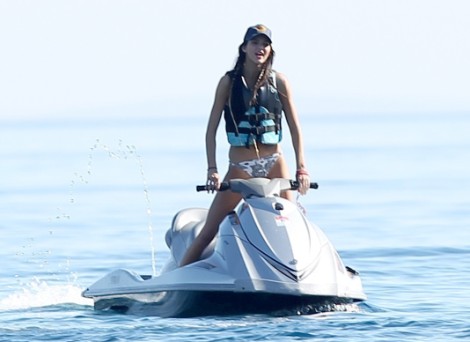 Well… if the shoe fits?

We’ve got ourselves a feud! Frances Bean Cobain and Kendall Jenner are at it. Actually, Kendall was just being a Kardashian and Frances Bean called her out on it which was pretty amazing. I doubt Kendall has the balls to retaliate. She would be so much cooler if she did though….

It all started when Kendall Jenner tweeted earlier this week: “Just wish things could be easier sometimes mann.”

Cobain responded: “@KendallJenner oh shh. There are kids on earth abandoned&homeless who forcibly drink contaminated water because clean water isn’t accessible…. oh ya, not to mention, CANCER, famine, poverty, draught, disease, natural disasters, Death. Fuck, Humans are so self involved…. rather be a scumbag than a fucking idiot. Praise high IQ’s, good taste & awareness about the state of the world…. I’d like to thank my parents for providing me with a high IQ & I’d like to thank my grams for encouraging me not to be a self absorbed idiot.”

But before I go into the amazingness that is Frances Bean, can I just ask what the hell she’s doing trolling Kendall’s twitter account? Are they friends on there or something? If not, then how would she know (or why would she care) what Kendall’s spewing out? That part’s odd and Frances Bean needs to look real hard at herself for that one. But, regardless, she called Kendall out and it was pretty awesome. Was it harsh? Oh sure. But she is Courtney Love’s kid after all, subtly isn’t strong in that gene pool.

What do you think of the Francis Bean Cobain/Kendall Jenner fight? Does Frances Bean have a point or is she just picking on poor little Kendall. Attached are pics of Kendall’s rough life while on vacation in Greece….