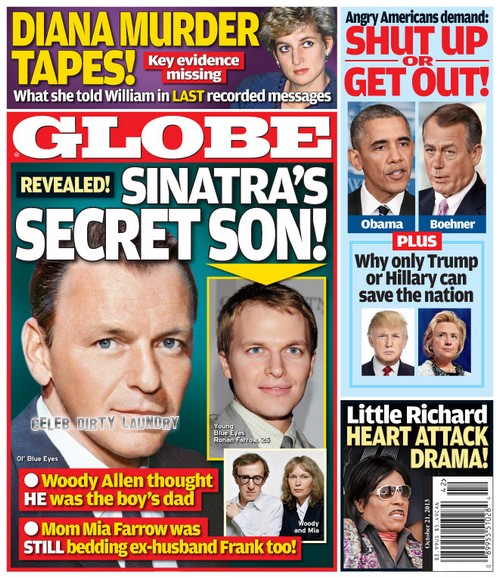 Prince William has willingly opted to totally change his life since welcoming his son, Prince George last summer. He quit the job that he loved with the Royal Air Force and is not only adjusting to fatherhood but also civilian life as well. Rumor has it that this next transitional year in William’s life is intended to be used to prepare him to take the throne later next year after Queen Elizabeth abdicates. According to the Oct. 21st print edition of GLOBE Magazine the Queen also recently handed William a very precious gift – audio tapes made by his mother, the late Princess Diana. The thing is that within those recordings not only is there a message of love, but also she confided her fears about being assassinated.

Supposedly these recordings were made only a few months before her car was involved in that fatal Paris crash and it is almost as if Diana predicted her own death. Elizabeth also gave William a dossier of information that her investigators have uncovered on the accident. Their findings seem to jive with Diana’s fears and it has fueled William’s current quest to hunt those responsible for his beloved mothers’ early death.

Also in the Oct. 21st print edition of GLOBE you can catch up on how the American people really feel about the government shut done. It seems that people are fed up with Obama’s and Boehner’s inability to put aside their differences in order to pull together for a greater good- economic stability for those working in our country. Some seem to believe that it’ll take someone like Hillary Clinton or even Donald Trump to storm in and get this messed cleaned up once and for all.

When Mia Farrow decided to give an explosive interview it seems that old Hollywood was turned on its ear! After decades of hiding the potential truth she now claims that Woody Allen may not be the father of Ronan Farrow after all. She now claims that the grown man is actually Frank Sinatra’s son and GLOBE magazine has all of the details!

Little Richard has to be my favorite original rock and roller so I was sad to see that he is suffering from heart disease. GLOBE goes into detail in this week’s issue on Penniman’s heart attack drama.

Grab yourself a copy of the latest issue of GLOBE today – but in the meantime, do you believe that Princess Diana was murdered?  How about Mia getting her revenge on creepy old Woody by revealing that he was probably cuckolded by Frank Sinatra?  If I were Ronan I’d rather be Frank’s son than Woody’s, that’s for sure. This week there will be more to enjoy than ever when I sit down with my copy of GLOBE.  I always count on GLOBE to investigate and report what the other news magazines are unable to discover!