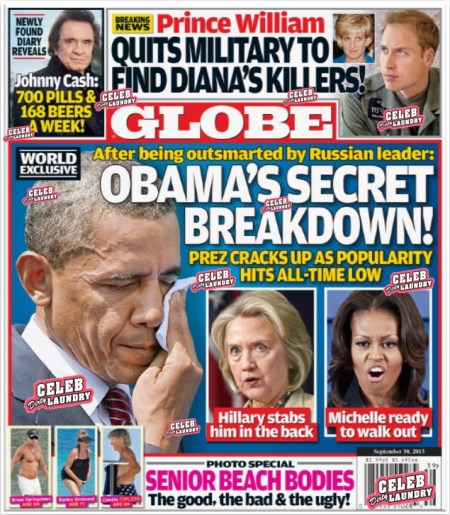 There were rumblings late in the summer that Prince William was intending to retire from the RAF after 7 years of active duty so when the announcement was made I don’t think many people were too surprised. He is going to spend a year transitioning back into regular civilian life and step up his royal duties. It’s a big time of change for William as he is adjusting to fatherhood and rumored to be the front runner for the throne after Queen Elizabeth abdicates next year. According to the Sept. 30th print edition of GLOBE Magazine, William also intends to find and bring to justice those responsible for Princess Diana’s death.

GLOBE revealed weeks ago that Queen Elizabeth has had her own team of investigators looking into the crash in Paris that claimed Diana’s life 16 years ago. The queen is tired of the rumors that have connected her family to Di’s death and so she set out to learn the truth. A dossier was compiled and handed over to William shortly after the birth of his son in July, giving him the tools necessary to track down and bring to account those responsible. It’s a task that is also near the top of his to-do list for this coming year.

Also in the Sept. 30th print edition of GLOBE is an article on President Obama who seems to have reached an all time low point in his popularity. First he made a powerful case for taking immediate action against Syria, a move that not everyone agreed with. Then when Obama didn’t get the support he had hoped for he seemed to get a case of cold feet.  GLOBE reports that Hillary Clinton has let him have it and Michelle Obama is ready to walk after watching her husband allow Russia’s Putin to take charge of the situation.

As usual GLOBE is covering several stories that none of the other weeklies will even dare to touch. While everyone else is obsessing this week over Miley Cyrus and other trite stories, GLOBE grabs the bull by the horns and takes on the issues that really matter.  Do what I do and get yourself a copy of GLOBE with it’s original stories and broad range of topics.