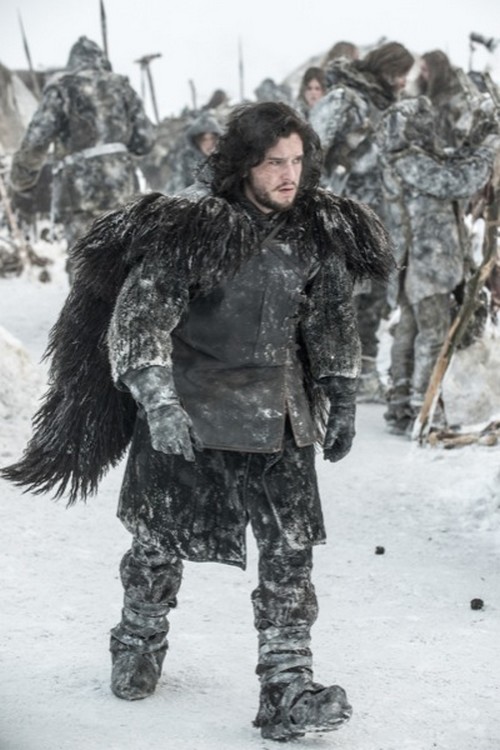 Tonight on HBO GAME OF THRONES returns with the premiere of it’s third season.  If you’re like us then you’re just waiting for the new season and all the usual amazingness. Season 1 and 2 of GoT were wonderful and HBO better not let us down.

Before tonight’s show here is where some of our favorite character were at the end of season 2.  Ned Stark’s daughter Arya and her friends Gendry and Hot Pie escaped Harrenhal and began walking towards her brother Robb’s forces in the Riverlands.  Bran was headed for the Wall.  Brienne of Tarth has Jamie Lannister and she is headed to King’s Landing to trade for Sansa and Arya.  Daenerys Targaryen (Danys) is looking for a boat to sail to the Westeros.  Joffrey Baratheon has gotten rid of Sansa and is now looking to marry Margaery Tyrel.  Jon Snow is pretending to be a traitor so he can get close to the King Beyond the Wall, Mance Rayder.  Stannis lost at Blackwater and has gone to Dragonstone.  Theon Greyjoy was in a spot of trouble.  Tyrion Lannister was hurt in the battle and is scarred and put aside by his family again.  Tywin Lannister is the hero of Blackwater and removes his son Tyrion as the Hand of The King.  If you missed last season’s season 2 finale, we have a full and detailed recap here for you!

In the new season the Lannisters hold total power over King’s Landing after defeating Stannis Baratheon’s forces.   Stannis has retreated to Dragonstone. Robb Stark, King in the North, still controls much of the South as well, and has yet to lose a battle.  Meanwhile Daenerys Targaryen is reunited with her three dragons and is  searching for ships and allies to take her home and allies to conquer it.

On tonight’s show Jon Snow is brought before Mance Rayder, the King Beyond the Wall, while the Night’s Watch survivors retreat south. In King’s Landing, Tyrion asks for his reward.  Littlefinger offers Sansa a way out. Cersei hosts a dinner for the royal family. Daenerys sails into Slaver’s Bay. 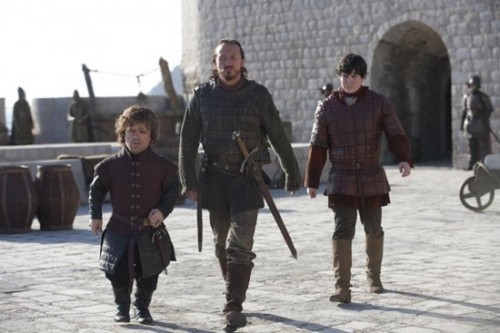 It looks like Joffrey Baratheon is going to be as evil as ever this season.  Jack Gleeson who plays the character said, “I think he’s as evil as he ever was but he’s channeling it through a different means. There’s a different dynamic – he’s trying to impress Margaery with his evil deeds and he’s still rebelling against his mother.”

Tonight’s show opens with Samwell running through the snow, he sees something and he calls out, “Brother.”   When he gets to what he sees it is 2 dead people.  Sam turns around and he gets attacked by a zombie, but the zombie starts to go on fire and it is the Night Watch and the head of the Night Watch who asks Sam if he sent the ravens.  Sam has not and he tells him it is the only thing he asked of him.

The head of the Night Watch tells his men they have to get back to the wall and war everyone the Snow Zombies are coming.  If they do not get back to warn them everyone will be killed.

Jon and Ygritte are traveling with the King of the Bones to meet the King Beyond The Wall, Mance Rayder.  When they get to the village Jon Snow is fascinated he has never seen a giant before. Ygritte warns him not to stare because he could make the giants angry.

Jon walks through the village as kids throw things at him because he is a crow.  She tells Jon not to look grim if Mance likes him he will live another day.

Jon goes into a tent to meet Mance.  He wants to know why he needs a crow.  Ygitte tells him that Jon killed Qhorin Half Hand.  Mance know that Jon is Ned Starks’ bastard.  Mance asks Jon if he likes Ygritte.  Mance tells Jon that Qhorin was there enemy and he is glad Qhorin is dead.

Mance calls Jon a trailor and he tells Mance if he is a traiter than Mance is too.  Mance is curious why Jon wants to join them.  Jon claims he wants to be free.  Mance does not believe him, he thinks Jon wants to be a hero.  He tells Mance that he stopped at Crastor’s keep and he saw Crastor leave his son in the woods and he saw what took it.  Mance wants to know why that would make him leave his brothers.  Jon tells him because when he told his commander he already knew.  Jon tells Mance he wants to fight for the side that fights for the living and asks Mance if he came to the right place.

Mance tells Jon he has to find him a new cloak.

Bronn is with a girl and a man interupts and tells Bronn that Tyrion wants to see him and it is a matter of life and death.  Bronn is not pleased.

Tyrion is in his room and someone knocks on the door, it is Cersei.  Tyrion does not want to let her in, but finally gives in.  Cersei says she came to see his face, she tells him it is not as bad as he thought.

She then makes a snarky remark about how his new rooms are not as good as the rooms of the Kings Hand.  She wants to know why Tyrion is going to see their father.

Cersei wants to know what Tyrion is going to say to their father.  She wonders if he will tells lies about Cersei and Joffrey.

Bronn shows up to Tyrion’s rooms and 2 of Cersei’s men are waiting outside.  They threaten Bronn, but Cersei comes out and the fight is avoided.

Bronn asks Tyrion why he called him.  Tyrion tells Bronn people want to kill him and he wants Bronn to protect him.  Bronn tells Tyrion if he wants him to protect him he has to pay him more.  He wants double because he is a knight now.

Davos Seaworth is on a rock and he signals to a boat to get help.  The boat sees him, they ask who he is.  He tells them he was in the battle of Blackwater and he is knight.  They asks which King he served and he tells them Stannis.

They take him on board and it is the Pirate Salladhor he tells him that everyone thought he was dead.  Davos losts his son in the battle and he is upset.  He finds out that Stannis is at Dragonstone from Salladhor.  Salladhor does not want to go to Dragonstone.  Davos wants to go to Dragonstone to cut Melisandre heart out.  Salladhor does not want him to because they will kill him.  Davos pressures him into agreeing and tells him when he is dead he will give his bones to his widow to wear around her neck.

Rob Stark, his mother, Catlyn and his army comes to Winterfell and finds it burned down and all the people dead.  200 Northsmen slaughtered like sheep.   They find Sir Jeremy Catelyn’s father’s bannermen dead.

They find one person alive, they give him water and he tells Robb his name is Tiber.

Tywin and Tyrion are meeting.  Tywin is writing and ignoring Tyrion.  Tyrion tells him the badge looks good on him, almost as good as it looked on him.  Tyrion asks if he enjoys being, “Hand of the King.”  Tywin tells him Tyrion he gave him power to council the King, instead he bedded harlots and drinking with thieves.

Tywin asks why he is there.  Tyrion tells him he protected the city, bled in the mud while Joffrey ran away.  He tells his father he wants some gratitude.

He tells Tyrion he would rather be covered with Maggots than give him Casterly Rock.  He then accuses Tyrion of killing his mother.  He tells him he will never allow him to turn Casterly Rock into Tyrion’s personal whorehouse.   His parting shot to Tyrion, “The next whore I find in your bed, I will hang.”

While Peter speaks to Sansa another servant comes up to Shae and warns her to watch out for Sansa with Peter.

Meanwhile Daenerys Targaryen is sailing on a ship and her dragons are growing and are flying and playing with each other.  She is impatient with how fast they are going and tells Jorah.  The Dothraki on the boat are all sick and having a hard time, but they are following Daenerys.

King Joffrey is traveling through the city and is carriage is stopped.  He asks why they are stopped and he is told it is Margery.  Margery got out and he walked among the people to see the children.  She refuses to have guards with her.

She stops to sit to talk to the children and tells them King Joffrey will take care of everyone.  She tells the person taking care of the children to come directly to her if she needs food or clothes for the children.

Back at the castle, Margery comes to dinner and Cersei comments that Margery was at the orphanage today.  She cautions Margery that she needs to be careful.  Cersei tells her that her and Joffrey were attacked there once.  Joffrey tells Margery that Cersei exaggerates and they were fine.

Cersei is not pleased how Margery is working her way into Joffrey’s heart.

Daenerys Targaryen is off her boat she is being shown the unsullied soldiers.  She asks about how they are trained.  The owner is bored with Dany and does not want to waste his time with her.  Jorah asks a question and the owner/master is rude.  He think they do not understand him and he is being mean.

The owner decides to make a demonstration, but Dany asks him not too.  He cuts the man’s nipple off and he makes a nasty comment about Danys being a bitch.  They explain that the unsullied has to kill a baby in a mother’s arms to be an unsullied.  The owner calls Danys a soft mewing cow.  Dany’s asks how many he has to sell, he replies 8,000.  He calls Daenerys a whore.  Daenerys cannot get over the fact that there are 8,000 dead babies because the man has 8,000 unsullied slaves.

In the Market a little girl gives Danys something, it opens up and there is a scorpion inside that comes after Danys.  A man kills the scorpion with a knife. Daenerys Targaryen (Danys) tells him she owes him her life.  Jorah recognizes him he is the head of her father’s Kings guard, Barristan Selmy and he asks to join Danys’ Kings Guard.