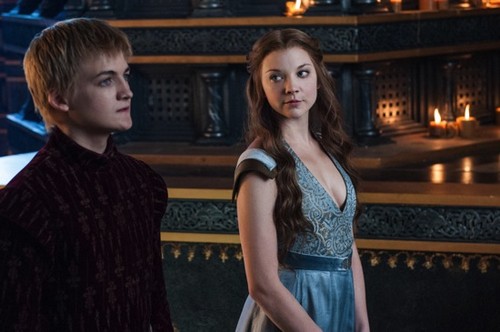 GAME OF THRONES airs tonight with a whole new episode called, “And Now His Watch Is Ended” and I cannot wait, the show is really heating up and I am really enjoying this season. On tonight’s show the Night’s Watch takes stock. Varys (Conleth Hill) meets his better. Arya is taken to the commander of the Brotherhood. Daenerys exchanges a chain for a whip. Did you watch last week’s episode? We did and we recapped it here for you!

On last week’s show Daenerys met with the slavers and adamantly says, “I’d like to buy them all. Eight thousand.” She is of course eager to buy an army, which will hopefully help her in her efforts to seize her rights to the Iron throne.   If you read the books you know she is buying the slaves from a slaver, but the sale does not work out how the slaver would like, but it does turns out well for Daenerys.  Meanwhile, Tyrion gains new responsibilities as Master of Coin and he is not pleased.  He also finds out more about Peter’s creative accounting.   Jon is taken to the Fist of the First Men.  Jaime strikes a deal with his captors and it does not turn out like he wants, I am curious how that is going to play out.

On tonight’s show there is going to be a lot about the Night Watch.  In the book the title of this week’s episode is what they say at the end of the funeral eulogy of a member of the Night Watch, “And Now His Watch is Ended.”    We know Lord Commander of the Night Watch Jeor Mormont falls during a battle so it may be his funeral.  Also we know he falls at the hand of someone we know.

We will get to meet  a character we met in Season 1 again, The Lighting Lord, Beric Dondarrion, Beric is the Lord of Blackhaven and the head of House Dondarrion, a vassal house to House Baratheon of Storm’s End.

Tonight’s show picks up with where we left off last week with the horrible de-handing of Jamie Lannister.   Poor Jamie has been put on a course wiht his hand hanging from his neck.  Brienne tells them that Jamie is going to fall and beseeches them to help him.  Jamie falls off his horse in a pile of mud and begs for water.  They pour it on his head.  He drinks the water and the man says, “I cannot say I have ever seen a man drink horse piss that fast.”  Despite losing his hand Jamie is a knight and he grabs one of the men sword and tries to fight back but he cannot with his left hand.  Brienne tries to help him.  The man overpowers him and tells him if he tries it again he will cut his other hand off.

Tyrion comes to Vary and asks if he know what Cersei is up too.  Tyrion want Vary to tell him who tried to kill him.  Vary starts to tell Tyrion the gory story of how he was castrated by a sorcerer.  Vary has the sorcerer who castrated him locked in a box and tells Tyrion if he has patience he will get revenge.

With the Night Watch they are still with Craster and Caster’s daughter/wives who just gave birth asks Sam to save her baby.

Bronn is dreaming again and Jojen Reed is with him.  He climbs a tree, looking for a raven, his mother Catelyn are mad at him, and scares him out of the tree.  He then awakes.

Vary interviews one of the whores Baelish and Vary’s ask her about Peter and if he was mad because the whores did not collect money from the boy who saved Tyrion.  She tells him Lord Baelish is too preoccupied with going to the Erie.  Vary wonders if Lord Baelish is forgetting Sansa.  She tells him he has not because he has book 2 feather beds on the boat taking him to the Erie and she is sure one is for Sansa.

Joffrey and Margaery are looking at old Targaryen bones in the castle, he continues to tour her around the castle.  Meanwhile it gives Cersei and the Queen of Thorns to talk.  Margaery convinces Joffrey to go to see his people who are outside the castle.  She tells Joffrey if he shows them his love they will adore him.  Joffrey commands that the doors be open.

Cersei is not pleased.  Margaery waves to the crowd and so does Joffrey.  Cersei is not happy with Margaery’s influence on Joffrey.

Theon Greyjoy is getting to know the man who saved him.  They are riding  on horseback through the forest and Theon finds out he is an Iron Islander who saw Theon being kidnapped as a boy.  While Theon is still upset about his father thinking he is a Stark and not a Greyjoy the man leads him to Yara, his sister.  Theon tells him he killed the Stark boy, he wanted to make his father proud of him, but it is too late.  Theon realizes he destroyed his only home Winterfell.  All of a sudden we find out the man who saved him was actually lying and has led him back to the crucifix where he was tied up too before his escape.  Back on his cross he goes and the man who brought him screams it was Theon who killed all the others in the forest.. What a liar.

Brienne is giving Jamie hell, because he is giving up, she tells him his hand was not everything.  She wants to know why Jamie helped her.  She knows he told the man who had them her father had sapphires.

Cersei goes to see her father Tywin to make sure that he is looking for Jamie.  He assures her he is doing all he can.  Cersei’s father more or less ignores Cersei.  But, Cersei tells him that the Tyrells are a problem, she feels Margaery has her claws into Joffrey.  Tywin tells her that is good, he tells her she has allowed Joffrey to run rough shot over everyone.  He also tells her she is not as smart as she thinks she is.

Vary comes to visit Grandma Olenna Tyrell and tells her the city is brighter with her here.  Vary tells her he knows she likes Sansa Stark.   Vary tells Olenna that he liked Ned Stark and he has taken interest in Sansa as well. He tells her Peter Baelish intends to leave with with Sansa Stark.  He tells her Littlefinger/Baelish was born with no lands, not title and no army.  He tells Olenna that Peter/Littlefinger is the most dangerous person in the kingdom.  He lets Olenna know that if Robb Stark falls, Sansa becomes the key to the North and Littlefinger will marry her.

Margaery Tyrell comes and sees Sansa praying and asks her what she is praying for?  Sansa tells her she cannot tell her.  She is trying to draw Sansa into her web and poor Sansa thinks she wants them to be close as sisters.  Margaery tells Sansa she has to see High Garden and she implies that Sansa should consider to marry her brother Loras.

Craster tells the Commander of the Night Watch he wants them dead.  As the starving Night Watch are watching Craster is eating.  The Night Watch demands that Craster gives him the food they have hidden.  Craster demands that they leave.  The man calls Craster “A Daughter Fucking Wilding Bastard” and kills him.  A battle ensues, in the fight the Lord Commander, Margaery Tyrell gets killed.  The Night Watch men feel he was too accommodating to Craser.  Samwell runs out and grabs Craster’s wife Gilly and her new born son and they run.  Meanwhile the Night Watch man screams, Run Piggy.

The Hound is being held by the Brothers Without Banners and the Hound tells them they are fighting for ghosts.  We meet their leader Beric Dondarrion and they want him to children he killed and raped.

Daenerys Targaryen is headed to collect her slaves.  She has her dragon and she carefully gives him to the slaver, Kraznos.  The slaver gives Daenerys the whip, Denerys walks down to her unsullied army in fluent Valyria, shocking the slaver.  She says, “I am Daenerys Stormborn of House Targaryen, of the blood of old Valyria” and then she commands them to slay every soldier and their masters.  She then commands her dragon to breathe fire on the slaver and kill him.

Daenerys rides among her unsullied she tells them they have been slaves all their live and now they are free.  She tells them anyone who wants to leave may leave and they will not be hurt.  She asks if they will fight for her, they start banging their spears, I am guessing that means yes.  Daenerys and her unsullied army and her dragons march away and she drops the whip on the ground.