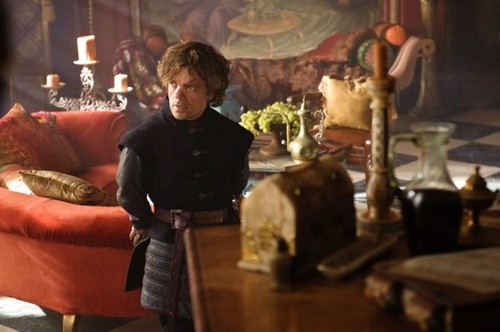 GAME OF THRONES airs tonight with a whole new episode called, “Walk of Punishment” and I cannot wait, the show is really heating up.  On tonight’s show Jon (Kit Harington) is taken to the Fist of the First Men. Daenerys (Emilia Clarke) meets with the slavers and it does not turn out well for the slavers.  Did you watch last week’s episode?  We did and we recapped it here for you!

On last week’s show the show was all about character development.  Jamie Lannister was taunting Brienne of Tarth, whats new?   He told Brienne she was not Renly’s type, “He preferred curly-haired little girls like Loras Tyrell. You’re far too much man for him.”  Brienne and Jamie got into it, but in the end they formed a sort of alliance.  Margaery started planning how to break Joffrey’s bond with Cersei.   Joffrey and Margaery scenes are great, she is teasing Joffrey and it looks like Joffrey may have met his match.  Sansa said too much to Margaery’s grandmother about Joffrey.   Shae asked Tyrion for a favor.  Arya encountered the Brotherhood Without Banners

On tonight’s show  Daenerys meets with the slavers and adamantly says, “I’d like to buy them all. Eight thousand.” She is of course eager to buy an army, which will hopefully help her in her efforts to seize her rights to the Iron throne.   If you read the books you know she is buying the slaves from a slaver, but the sale does not work out how the slaver would like, but it does turns out well for Daenerys.  Meanwhile, Tyrion gains new responsibilities; Jon is taken to the Fist of the First Men and Jaime strikes a deal with his captors.

Tonight’s show opens with Robb Stark, Catelyn at the Viking funeral of Lord Hoster Tully.  Edmure Tully tries to hit the boat with a burning arrow but keeps failing.  His uncle Brynden Tully ‘the Blackfish’ pushes him asides and shoots an arrow and set the boat afire.

After the funeral Edmure brags to Rob about taking an old Mill.  Robb is not impressed.  Robb wanted him to draw him out to the West.  Robb is not happy they have Martin Lannister, a 15-year-old as a hostage and William.  Robb tells him they will not be able to trade the hostages for his sister.  They lost 208 and Robb is not pleased their men.

Varys, Peter Baelish, and Cersei are meeting with Tywin Lannister and Tyrion comes in and pulls his chair to the table across from his father.  Tywin wants to know the news of Jamie.  Tywin is not happy because no one know where Jamie is.  Varys tells Tywin that Robb is at the Riverland for the funeral of his grandfather.

Tywin tells Peter Baelish that Harrenhal would be perfect for him and he ask Peter to leave for the Erie to marry Lady Lisa.

Tyrion tells Tywin that the Royal Wedding might be the most expensive expense ever.  Tywin tells Tyrion he is appointing him Lord of the Coin.  Tyrion s not pleased by that news.  Cersei tells him he will be perfrect.

Brienne and Jamie are tied together on a horse.  Brienne is mocking Jamie about no being as good a swordsmen as people said.

Arya Stark and pals are still on the road with Thoros of Myr and the Brotherhood without Banners.

Catelyn tells her Uncle, Brynden that a person could almost forget they are at war.  Catelyn tells her Uncle she missed him and so did her father.  She asks him if he made peace with her father, he explains that he does not even think he remembers why they were fighting.  Catelyn is convince she will never see Bran or Rickton again.  She feels they abandoned them.  Brynden councils her to be strong.

Martin Lanister , asks Robb’s wife , Talisa iff Robb turns into a were wolf?  She tells him not to worry he does not eat children, only on full moons.  haha!

The Night Watch are lucky to come upon Crastor’s compound and he lets them in, but is not pleased.  Crastor tells them they all should be kissing his feet for letting them in, but he is a godly man.  In the background one of Crastor’s wives is giving birth and yelling.  Crastor starts taunting Samwell.  He says he is, “a walking feast” and the Night Watch should feast off him as he walks.

Samwell goes outside and finds Crastor’s wife who gave birth, he peeks in but runs away.

Someone Theon’s sister Yara sent to help Theon releases him and puts him on a horse and sends him to Yara. Theon promises to make him a Lord of The Iron Islands.

Standing on Dragonstone beach Melisandre is going away and Stannis is not pleased, he thinks she is abandoning him.  Stannis thinks everyone is laughing at him, he tells Melisandre that he wants Robb Stark and Joffrey dead.  He tells Melissandre he wants another son, but she tells him it would kill him.

Melisandre assures Stannis he will be King but first there much be sacrifices, the Lord of Light demands it.

Daenerys questions Missandei about the unsullied and asks her if she is willing to go with her to war.  Missandei answers, “All Men Must die.”  Daenerys tells her they are not men.

Tyrion gets Baelish’s Royal Ledgers from the whorehouse.  Baelish reminds Tyrion that he owes Podrick his life for saving him.  Bronn and Tyrion leadx Pod into a room with women.  Tyrion tells Pod it is reward for Pod saving him and all the women are for him.

Tyrion tells Bronn for years he has heard Little Finger was a magician.  Tyrion tells Bronn that Littlefinger (Peter Baelish) is not a magician he borrowed all the money and the crown cannot pay it back.  Tyron is worried about the Iron Back of Bravos because if they don’t get their money they may fund their enemies.

Podrick comes back and gives Tyrion his money back.  Podrick tells Tyrion the whores would not take his money they liked him.  Tyrion is confused, Bronn asks Pod if the ladies enjoyed him so much they worked for free.

Theon Greyjoy thinks he is free but meets up with the warriors again.  They chase him and knock him off his horse to the ground and threaten him.  They ask him if he knows what they do with people who escape.  One of the men scream they should take off his pants, he wants to, “F*ck him into the gound.’  Arrows start to come out of now where and shoot all the warriors.  A boy comes over and extends him hand to Tyrion and tells him to come, “Winter is coming.”  Not sure who the boy who saved him is.

Jamie and Brienne are still with members of the Brave Companions, it is night and the men come to get Brienne with the intention of raping her.  Jamie tells her not to fight.  Jamie tells the leader, Vargo Hoat that Brienne’s father is the Lord Selwyn of Tarth from the Isle of Sapphires and he would buy Brienne back if she is still a virgin with sapphires.  The man calls his men to bring Brienne back, Jamie has saved her honor.

Jamie does not stop there he asks his captors to let him lie down.  They offer him fresh partridge by the fire and bring him over to a tree stump to have dinner.  Unbeknownst to Jamie they are playing him and they grab him and start poking at him with a huge carving knife and taunt him about how Jamie thinks he can say his father’s name and people will quiver.

Both of Jamie’s arms are on the tree stump and one of his captor wields the carving knife and chops Jamie’s hand off.  Yuck!

Jamie looks at his hand fall off his arm, and he looks as surprised as we do.