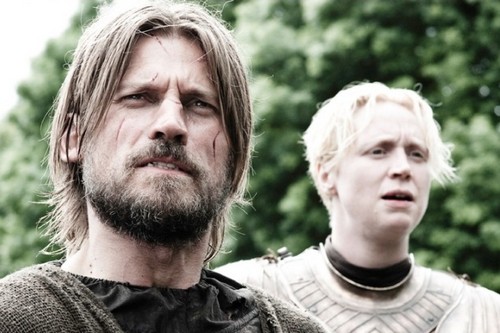 GAME OF THRONES kicked off tonight with the third season premiere and it was a fantastic episode.  Next week’s episode is called, “Dark wings, Dark Words,” and the significance of the title, is it is an old saying about messenger-ravens, referring to the fact that such urgently delivered messages are often bad news. We have a sneak peek video and some insight for you below on what is going on next week below.

On tonight’s show Jon Snow was brought before Mance Rayder, the King Beyond the Wall, while the Night’s Watch survivors retreat south.  The night watch wanted to get to the wall as soon as possible to warn everyone the Wildings were coming. In King’s Landing, Tyrion asks for his reward but his father lets him know in no uncertain terms that he is not getting what he wants.  Littlefinger offers Sansa a way out. Cersei hosts a dinner for the royal family and she started to learn that Margery is not going to be easy to get rid of.   Daenerys sailed into Slaver’s Bay to find her slaves.  Did you watch tonight’s season premiere?  We did and we recapped it here for you!

Spoiler alert: If you’re one of those people who doesn’t like spoilers, stop reading now! We have some juicy spoilers for you about the season 3 episode 2 HBO’s “Game Of Thrones.”

HBO’s Official Synopsis:  Sansa says too much; Shae asks Tyrion for a favor; Jaime finds a way to pass the time; Arya encounters the Brotherhood Without Banners.

On next week’s show in the first teaser we have seen Jamie Lannister is taunting Brienne of Tarth, whats new?   He tells Brienne she was not Renly’s type, “He preferred curly-haired little girls like Loras Tyrell. You’re far too much man for him.”

Brienne is not interested in Jamie’s rumors, but Jamie is not one to stop and tells Brienne not to worry about Renly, his proclivities were the worst kept secret in court.  He finally gets Brienne’s goat when he says, “It’s a shame the throne isn’t made of cocks, they’d have never got him off it.”

Jamie ends there conversation with the wise words that he does not blame Renly or Brienne, because you don’t get to choose who you love.  I guess he was thinking about he loves his sister, Cersei.

Margery’s grandmother puts Sansa on the spot and asks her to tell her everything she knows about Joffrey.  Yikes!  If it goes like it does in the book, she is going to spill the beans.

Meanwhile Margery knows how to play the game and continues to manipulate Joffrey.  She councils Joffrey that he must do whatever he need to do, because he is the king.

Osha, Bran and Hodor are in the woods on the way to the Wall.  She is worried what is after them even if no one knows they are alive.  Bran’s wolf is freaked out too.

Back with the Wildings and Mance a man tells Mance while Jon Snow is there he sees a vision of dead crows (night watch).

There is a whole lot more going on in the preview video with Robb Stark, Arya, Brienne and more!

The Game Of Thrones Season 3, Episode 2 “Dark Wings, Dark Words” airs on HBO on April 7th, 2013. Check out the preview videos from episode 12 below and let us know in the comments below what you think!