BY Annemarie LeBlanc on May 19, 2013 | Comments: 6 comments
Related : Game of Thrones, Recap, Television 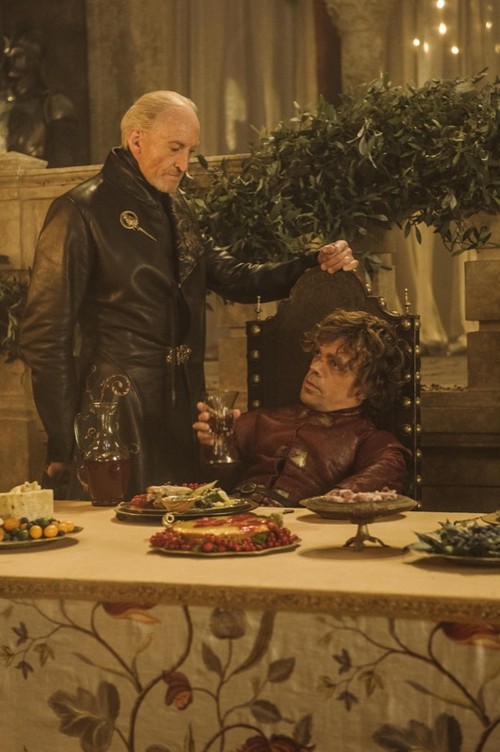 GAME OF THRONES continues tonight with a whole new episode called, “Second Sons.”   We’re quickly heading towards the finale with only 2 more episode left after tonight.   On tonight’s show King’s Landing hosts a wedding, and Tyrion and Sansa spend the night together. Daenerys meets the Titan’s Bastard. Did you watch last week’s episode? We did and we recapped it here for you!

On last week’s show the Mother of The Dragon’s Danaerys marched her unsullied warriors on Yunkai.  In Yunkai there are 5,000 slaves she could add to her army.  It looks like Danaery’s dragons have grown much larger.  Shae was not pleased at Tyrion’s new situation.  Sansa Stark also learned that she will marry Tyrion at the demand of his father, Tywin.  Sansa was not pleased about it and neither was Shae.   Reese Bolton left Brienne at Harrenhal with Vargo as he was headed to Kinds Landing.  Vargo tried to rape Brienne, but she bit his ear off and he threw her in the bear pitt.  Jamie showed up to save the day!

On tonight’s show when Daenerys Targaryen marches on Yunkai, they supplement their defense with sellswords. Daenerys defeats the city in the Battle of Yunkai.  Daenerys gets to meet Mero who Jorah tells her is a dangerous man and so are all his men.  Dany tells Jorah a man who fights for gold cannot afford to lose to a girl.  We are going to see Stannis this week he goes to tell Davos that unless Stannis triumphs in is his quest to be King darkness is going to encompass everyone.  Stannis demands proof from Melisandre that he will be King.

King’s Landing is going to host a wedding, Joffrey and Margaery. Tyrion and Sansa will spend the night together.  Sam and Gilly will end up,meeting an older gentleman.

Arya wakes up and picks up a rock, The Hound is sleeping and she plans to crash it over his head.  He wakes up and tells her she has one change, “Kill him and she win, hit him and he lives and he breaks two of her hands!”

She decides not to and Arya and the Hound ride together.  He tells her be happy it is he who found her because there are men worse than him.  He then tells Arya how he saved her sister Sansa from rape.  Arya thinks The Hound is taking her back to Kings Landing and Cersei and Joffrey.

The Hound tells her f*ck Cersei and Joffrey he is taking her to the twins to see her brother and her mother.

Over with Daenerys Targaryen they are watch the Second Sons and Jorah tells Daenerys that they are dangerous and led by a man called Mero, Titan’s son.  Daenerys wants to talk to Mero about winning.  Jorah brings the captains of the Second Sons to meet her: Mero, Rendell and Dario.  Mero is pretty obnoxious to Daenerys, but she is not taking it.  Daenerys has 8,000 unsulled and the Second Sons have 2,000.  Daenerys asks then to fight for her, she gives them two days to answer her.  Mero’s parting shot to Daenerys, “In the second sons we share everything, and we may just share you Mother of Dragons.”  Daenerys tells Sir Batheon when it comes to battle kill Mero first.

Melisandre brings Gendry to Stannis and asks his men to have him bathed.   Stannis wonders why she wants him bathed if she is going to kill him.  Melisandre wants him calm so she does not taint his meet with fear.

Davos is learning to read.  Stannis comes to visit Davos to see how he is doing.  Davos tells him he cannot complain.  Stannis gives him his condolences for his son.  Stannis lets Davos know that Melisandre has brought Robert Baratheon’s son.  Davos is upset because he knows Melisandre is going to kill Gendry.  Stannis tells him he has not chose his destiny but he must do his duty, what is one bastard boy against a kingdom.

The Captains of the Second Son are talking about Daenerys and what to do about her.  The Second Sons do not want to fight Daenerys unsullied soldiers, so they decide that one of them will sneak into her camp and kill Daenerys.  They draw coins to see who will go.

Back with Sansa, Tyrion comes to see her, he wants to speak to Sansa alone.  Tyrion assures Sansa that he did not want this, but after today she will not be a prisoner anymore, she will be his wife.  Tyrion tells Sansa he knows how she feels, but she tells him she doubts it.

He promises her that he will never hurt her.  He asks her if she drinks wine and she answers, “When I have to!” Tyrion tells her today she has too.

Margaery Tyrell is speaking to Cersei and she decides to regale Margaery with the tales of a family that was slaughtered by her father Tywin.  Cersei then tells Margaery if she ever calls her sister again, she will have her strangled in her sleep.

Joffrey shows up and takes Sansa’s arm.  Because Sansa’s Father Eddard Stark is dead it is Joffrey’s duty to give Sansa to her husband.  Joffrey is such a little creep he removes the stool Tyrion had put so he could reach Sansa.

Tyrion has to put a cape of Sansa’s shoulders but he cannot reach, the guests laugh and Tyrion asks Sansa to bend so he can put the cloak on her shoulders.  The wedding proceeds.

Gendry is clean and he is amazed by the riches of the room he is in.  Melisandre offers Gendry wine, he is hesitant but she takes  sip to prove she is not trying to poison him.  Gendry likes the wine, but he is still distrustful.

Melisandre tells Gendy there is a power inside him he cannot understand as she starts to undress him.  Melisandre tells Gendry that the Lord of the Light wants this from him.  Gendry does not think that what she wants to do seems religious.  She strips her clothes off and tells Gendry death is coming to everyone and her and Gendry can stop it.  She puts him on the bed and tells him she wants to fight death with him and she makes love to him.  As he is getting into the action she ties his hands to the top of the bed and then she ties his feet up.  She gets off him and takes a box with leaches and drops it on his body.  Melisandre tells Gendry there is power in the Kings blood.

Gendry screams as the leachs take his blood.  She puts on on his penis and he screams when she removes it.  Stannis and Davos comes in and Stannis takes the leaches and put them in the fire naming the name of his enemies.

At the wedding feast of Tyrion and Sansa.  The Queen of Thorns is musing about what Margaery and Loras will be to the Joffrey.  Sansa asks Tyrion if she can be excused and Joffrey follows her out.

Tywin comments that Tyrion is drunk and he reminds Tyrion that Sansa needs a child in her.  Tyrion tells Tywin that he is not drunk enough.  Tywin warns Tyrion that is will do his duty.

Loras comes to speak to Cersei and she is rude to him.

Joffrey tries to get the bedding ceremony started but Tyrion refuses to have the ceremony.  Joffrey insists and commands it but Tyrion threatens him and tells him he will cut his penis off.  Joffrey is furious and Tywin stands up and says they will skip the ceremony.

Tyrion and Sansa head back to their room and Tyrion continues drinking.   Tyrion tells Sansa that his father has commanded him to consummate the marriage.  Sansa purs herself a glass of wine and starts to remove her clothes as Tyrion watches.  Tyrion tells her to stop, he tells he he can’t.  He tells Sansa he won’t share her bed until she wants him to.  Sansa wonders what will happen if she never wants him to.  He tells her, his watch begins and passes out on the chaise.

Over at Daenerys’ camp she is having a bath and speaking to her maid.  As they are talking a mask man comes in and puts a knife to her maid’s throat.  It is Darios and she asks if he came to kill her.  He tells Daenerys that he had a difference of opinion with the other captains and he opens a bag and drops the other heads of the captains out.  He tells her they wanted him to kill her and he did not want to.

She steps out of the bath naked and she asks Dario if he will fight for her, he kneels and pledges his allegiance.

Shae walks in and Tyrion is still sleeping on the chaise and he tells Shae she should have knocked.  She goes to look at the bed to see if he deflowered Sansa and there is no stain.  She picks up the sheets and smiles.

Samwell and Gilly are walking through the snow in the forest with her baby.  They come to a cottage.  Samwell wants to stay in the cottage because it is getting dark.  Gilly gives her the baby as she collects wood.

Samwell is having trouble making a fire, Gilly tells him it does not matter he should come under the furs and they can keep each other warm.  Samwell wants to know if Gilly thought of a name for the baby.  She accuses Sam of speaking fancy to confuse her.  She gives him the baby and tells him she will build the fire.  Sam tells her the baby should really have a name.

Gilly builds a fire and the ravens are screaming.  Samwell gets up to go out and Gilly beseeches him not to go, he picks up his sword as he heads out.  Gilly follows him out and there are 100’s of ravens in the trees.  They see something walking in the trees and Gilly is sure it has come for the baby.  It is a zombie and it grabs for Samwell’s sword and it shatters to pieces.  The zombie heads towards Gilly and the baby.  Samwell takes out the Dragon bone dagger that Jon Snow gave him and stabs the Zombie and it falls down dead.  He takes Gilly’s hand and they run.