BY Annemarie LeBlanc on May 12, 2013 | Comments: 6 comments
Related : Game of Thrones, Recap, Television 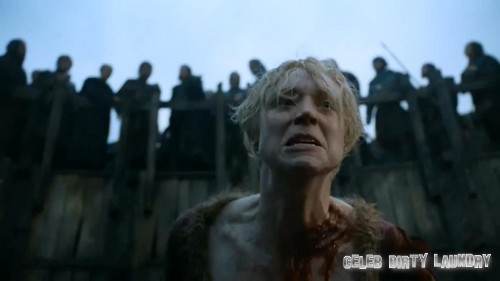 GAME OF THRONES continues tonight with a whole new episode called, “The Bear and the Maiden Fair.”  We’re already well into the second season and the show is really heating up and headed towards the finale in three weeks. On tonight’s show Shae chafes at Tyrion’s new situation. Tywin counsels the king, and Melisandre reveals a secret to Gendry. Brienne faces a formidable foe in Harrenhal.  Did you watch last week’s episode? We did and we recapped it here for you!

On last week’s show with the wildlings have reached the wall, Jon Snow was within spitting distance of Castle Black. His role of double agent within the clan was becoming more complicated – it was only a matter of time before he came face to face with one of his friends. In the plot, the episode title is on the nose: the Wildlings had to scale the thousand-year-old wall, climbing hundreds of feet up its sheer face to meet whatever protections lay on the other side.

On tonight’s show the title of the episode is a popular song in the Westeros.  It is about a bear seducing a maiden.  The men who captured Jamie Lannister were singing it as they took Jamie and Brienne to Harrenhal.

The Mother of The Dragon’s Danaerys marches her unsullied warriors on Yunkai tonight.  In Yunkai there are 5,000 slaves she can add to her army.  It looks like Danaery’s dragons have grown much larger.  Shae is not pleased at Tyrion’s new situation.  Sansa Sark also learns that she will marry Tyrion at the demand of his father.  Sansa is not pleased about it and neither is Shae.   Reese Bolton leaves Brienne at Harrenhal with the Vargo as he headed to Kinds Landing.  Vargo tries to rape Brienne, but she bites his ear off and he throws her in the bear pitt.

Tonight’s show opens with Jon Snow and the Wildings, they are marching to Castle Black.  Ygritte wants to know how far it is, but Jon tells her he is not sure.  She asks Jon about the men carrying banners when the Night Watch march, he tells her it is an honor for them, she cannot understand it.  Why would it be an honor to march rather than fight, says Ygritte.

Jon says to Warg Orell, “You cut me loose on the wall.”  Warg tells Jon he cut Ygritte  loose too and she is not sulking because Ygritte understands. Warg  tells him, “Wildlings kill each other when it is necessary and Ygritte knows that.”   He tells Jon he will never hold on to Ygritte.

Catelyn tells her brother that Walder Frey is prickly.  Robb tells his mother the Frey should be pleased they are getting a marriage, but Catelyn tells her Robb they wanted a King.  The Starks are on their way to The Frey’s to marry off Catelyn’s brother, Edmure Tully to Frey’s daughter.

Robb Stark’s wife, Talisa tells him she is pregnant.  He is overjoyed.

Warg walks up to Ygritte and tells her she should be with her own, namely him.  Warg thinks Ygritte loves Jon Snow because he is pretty.

Tyrion is talking to Bronn and comments that Sansa is a child.  Bronn thinks it is simple.  He tells Tyrion, “She’s a lady, you’re a lord, she’s beautiful.  What is the problem?”  Tyrion does not see it.  Bronn mocks him and tells him he knows Tyrion really wants to sleep with Sansa.

Lord Tywin comes into the throne room to see Joffrey.  Joffrey summoned him because he wants a report of the small council.  Joffrey claims he has been too busy to attend.  Joffrey tries to bully his grandfather, but that does not work.  He tells his grandfather he wants to know about the Targaryen girl and her dragons, he asks if it is true.  Lord Tywin tells Joffrey it is true.  Joffrey wonders why Lord Tywin is not worried?  Lord Tywin tells him all the dragons are dead and he is not worried about the new stories.

Daenerys and her men come to the yellow city, Yunkai.  She sends a man to the city to ask them to surrender.  If they refuse she instructs her man to tell them they will face the same fate as the last city she entered.

Daenerys is sitting with her dragons and a rep of the Masters from Yunkai comes to see her.   The Masters of Yunkai have sent a gift to Daenerys.  He tells Daenerys that there is more treasures on her ship.  They are giving her as many ships as she wants and gold.

Daenerys tells her she is giving him a gift, his life.  She tells him they have to release all their slaves and give all the women and children food and clothing for their years of savagery and slavery.  He tells Daenerys she is mad and warns her he has powerful friends.  He leaves.

Daenerys tells Jorah to find out who his powerful friends are.

Tyrion gives Shae a present, golden chains.  Shae asks if she is going somewhere.  Shae is very jealous that Tyrion is marrying Sansa.  Tyrion tells Shae he will do his duty and marry Sansa.  He will also buy Shae a home, with fine clothes and any children they have will be well taken care of.  Shae is not pleased. She walks out of the room with a few choice words.

Melisandre and Gendry are sailing past Kings Landing.  Melisandre asks Gendry if he ever wondered where his strength comes from.  He tells Melisandre he was born in Fleas Bottom.  Melisandre tells Gendry he is the son of Robert Baratheon, King.  Gendry realizes he is a Bastard.

Arya is sitting with Beric and she won’t talk to him.  She feels Beric is a traitor because he gave Gendry up.  Anguy comes in and tells Beric there is a Lanniser raiding party about.  Beric is pleased and they are going after it.  Arya is upset and she run’s out because she realizes they are headed away from Riverrun.  As she runs threw the woods she gets captured by Sandor, The Hound.

Jamie Lannister comes in to see Brienne.  Jamie tells her he is going the next day and she is staying behind with Locke.  Brienne reminds Jamie of his vow and he promises to release the Stark girls.

Theon Greyjoy has been taken down from the cross he was tied too and he is with two women who are ravishing him.  Just when things get heated up his captor walks in.  He talks about Theon’s famous penis.  He wants to know if Theon thinks it is his most precious part.  Theon asks for mercy and his captor tells him that at least he is not killing him, he is just making him different.  Theon yells.

Back with the Wildings and they are still marching towards Castle Black.    Jon tells Ygritte when she sees Winterfell towers she will swoon. Ygritte does not know what swooning means.  He tells her girls swoon/faint when they see blood, Ygritte replies she does not faint at blood.  Jon tells Ygritte they won’t win.  Six times the Wildings tried to attack the Night Watch and they did not win and they will not win this time.  Jon tells her if she attacks the Wall she will die, all of them.  Ygritte grabs him and kisses him and tells him, he is hers and if they die they die, but first they live.

Bran is chatting to the one of the Children of The Forest and Osha is not pleased.  Osha tells Bran he has a family and he has to get back to Castle Black.  Bran tells her he fell from the tower for a reason.  Osha tells them don’t know, she was there.  She had a man once, Bruni and he disappeared.  People said her man left her, she knew he did not and one day he came back and he was not Bruni but a creature.  He tried to kill her, she was forced to burn her hut down with him inside it.  Osha tells Bran she promised his Maester she would get Bronn to Castle Black and no further.

Jamie Lannister is resting while the man who takes care of the Ravens at Harrenhal tends to his hand.  Jamie asks him if he sent a raven to Brienne’s father.  He tells Jamie that he did, it came back with an offer of $300 and Locke refused it.  He tells Jamie tonight the men will make use of Brienne.  Jamie is upset and demanded that he is taken back to Harrenhal.

Jamie gets back to Harrenhal and finds Brienne with a sword in the pit with a bear.  Jamie offers Loche anything he wants if he takes Brienne out.  Locke refuses and tells Jamie to go F*ck himself.  Jamie jumps down in the pit with Brienne and tells her to get behind him.  An arrow comes down from the top and hits the bear.  The man tells Locke that Lord Bolton told him to take Jamie back to Kings Landing alive.  Jamie and Brienne get out of the pit alive.  When they come up Locke tells Jamie that, the bitch stays.  Jamie tells him Brienne is coming back to Kings Landing with him.  Jamie then sarcastically tells Locke, they must be on their way and says, “sorry about the sapphires.”