BY Annemarie LeBlanc on May 5, 2013 | Comments: 6 comments
Related : Game of Thrones, Recap, Television 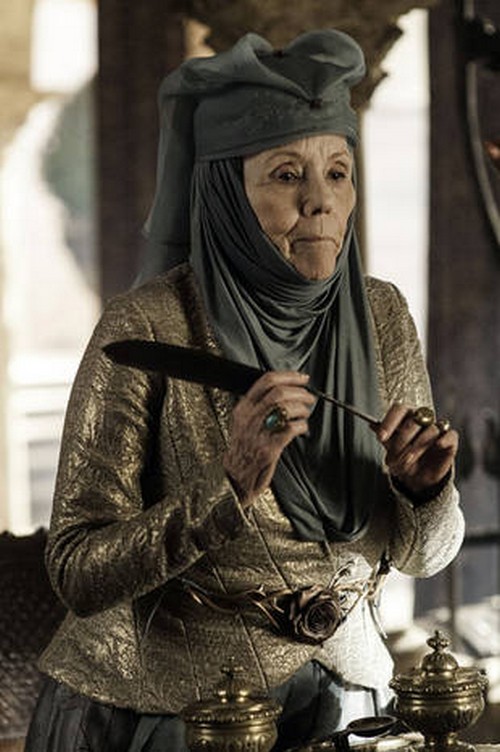 GAME OF THRONES continues tonight with a whole new episode called, “The Climb.”  We’re headed into the second part of the season and the show is really heating up. On tonight’s show Robb weighs a compromise to repair his alliance with House Frey. Roose Bolton is going to decides what to do with Jaime Lannister.  Did you watch last week’s episode? We did and we recapped it here for you!

On last week’s show we found out Vary’s and Lady Olenna Tyrell plot, to save Sansa Stark and marry her off to Lady Olenna’s grandson, Loras. We did not get to see much of Jon Snow last week but there was a death in the Night Watch, as we predicted the Lord Commander was killed.  He was not killed by a Wildling, he was killed by Rast, a member of the Night Watch.   Daerney got her 8,000 unsullied slaves and did not not lose any dragons.  Cersei was unpleased with Margaery’s influence on Joffrey, she expressed as much to her father, Tywin.  Tywin has come up with a way to stop Vary and Lady Olenna’s plan.  He old Cerei he plans to marry her off to Loras.

On tonight’s show with the wildlings having reached the wall, Jon Snow is within spitting distance of Castle Black. His role of double agent within the clan is becoming more complicated – it’s only a matter of time before he comes face to face with one of his friends. In this plot, the episode’s title is on the nose: the Wildlings must scale the thousand-year-old wall, climbing hundreds of feet up its sheer face to meet whatever protections lay on the other side.

Tonight’s show opens with Samwell in the Haunted Forest with Gilly and her baby and he is making a fire to keep them warm.  She asks Sam about the Wall and he tells her how big it is, she is surprised.  He also tells her about Castle Black.  Gilly asks Sam to sing for her and he sings her a song.

Also in the forest are Bran, Asha and a girl they are skinning rabbits. The two are fighting over who is the better rabbit skinner.   Bran tells them they cannot fight each other or they won’t make it to the wall.

The Wildings are on the way to the wall with Jon.  Ygritte asks Jon if he is afraid to go over the wall and Jon agrees he is.  Ygritte is teasing Jon about when they made love.  She finally stops and tells Jon he is a proper lover and he is loyal and brave.  She tells him that she knows he has not stopped being a crow, but he better be loyal to her.  She then warns him to never betray her.  He assures he will not.  She threatens to cut his c**k off and wear it around her neck if he does.

Arya is in the forest practicing her archery, she is told by Anguy a skilled archer of the Brotherhood Without Banners that she is good, but not as good as she thinks she is.  As she is practicing horses trot up and it is Melisande.  She accuses the Thoros of giving up the fight.

Melisande is taken to the cave by Thoros and meets with Beric Dondarrion, she is shocked that he has been brought back to life so many times.  Last week Beric was killed by The Hound.  Thoros who is a Red Priest tells Melisande that he keeps asking the Lord of Light to help him and he does.

Arya tells Anguy and Thoros she does not like Melisande.

Melisande comes back with Beric Dondarrion and his men walk up to Gendry and take him.  They tell Arya the Lord of Light needs him.  Gendry is upset because they told him he could be part of the Brotherhood.  Melisande tells him he will be more than they are.  Arya calls Melisandre a witch, she comes over to her and tells her they will meeting again.

At the Wall, the Wildings are scaling the huge ice wall, the climb is treacherous.

Back with Theon Greyjoy he is still tied to the crucifix and being tortured.  Theon captor asks him what body part he needs least, and asks him if he has been wondering why he is there? where he is and who he is?  He tells Theon he should guess the answer.  Theon asks if he guesses can he be released.  He tells Theon there will not be a happy ending for him.  Each time he guesses wrong he tortures him more.

Theon guesses that he is being tortured because he betrayed Rob Stark?  First his captive agrees and then he tells him he lied and he is torturing him because he likes too.

Robb Stark is meeting with the Frey’s sons, they tell Robb he can have their loyalty if he makes a public apology for insulting the Frey daughter.  They also require Harrenhal and all the lands.  Finally they need his Uncle Edmure Tully to marry one of their sisters.

Robb tells his Uncle he has won every battle but he is losing the war, if they do not do this they lose the war.  His Uncle finally agrees to marry the Tully girl.

Jamie and Brienne are having dinner with Reese Bolton.  Reese cannot decided what to do with Jamie.   Jamie convinces to send him back to his father.  Reese Bolton finally agrees as long as Jamie tells his father Tywin that Reese had nothing to do with his hand being cut off.  Reese tells Jamie he can go, but Brienne is staying.

Tywin Lannister is meeting with Lady Olenna and he tells her his intention of marrying Cersei to her grandson, Loras.  Lady Olenna is not interested because she feels Cersei is too old.   Tywin then tells Lady Olenna if she marries Loras to Cersei then the rumors of Loras being a homosexual will die down.  Lady Olenna not one to back down and alludes to the fact that Cersei and Jamie sleep together.  Tywin is not pleased.  Tywin then threatens Lady Olenna and tells her if she does not agree, he will appoint Loras to the Kings Guard and he will never be able to marry and the Tyrell line will die.  Lady Olenna backs down.

Meanwhile Ygritte, Jon and the Wildlings continue to scale the Wall and the Wall starts to disgorge sheets of its own ice and Jon and Ygritte lose their hold on the wall and were hanging from Giantsbane’s rope.  Warg Orell yells at him to cut them lose, as Warg starts to cut Jon swings back and forth and gets his pick in the ice just before he falls with Ygritte tied on to him.  Jon saves himself and Ygritte.

Tyrion speaks to Cersei and tells her he is not sure who is getting the worse deal.  Cersei tells Tyrion that they are being shipping on a boat to hell.  Tyrion asks her why she tried to kill him.  Cersei assures Tyrion that he has nothing to fear from Joffrey he will not hurt him.

Tyrion tells Cersei that when Jamie comes back Loras may come down with sword through bowels.

Sansa is speaking to Shae, Sansa is excited about her upcoming wedding to Loras or so she thinks she is marrying Loras.   She is trying on a gown to wear to Joffrey’s wedding.   Tyrion comes in and wants to speak to Sansa alone.  Tyrion asks Shae to leave but she refuses.  Tyrion tells Sansa he has something awkward to talk to her about.

Vary comes in and Peter Baelish is sitting in front of the Throne.  Peter tells Vary that he knows about his plan to marry Loras to Sansa.  It seems the person that Vary and Peter hired to help them betrayed both of them.  Vary and Peter goes back and forth at each other.  Next week see Joffrey in a room with a girl and he has a bow and arrow he has killed the girl shooting arrows into her.

Next we see Sansa crying as she watches a boat sail away.

Back at the wall they finally made it up, Jon and Ygritte are exhausted.  Once they look down they are in awe of the view.  They stand up and embrace….