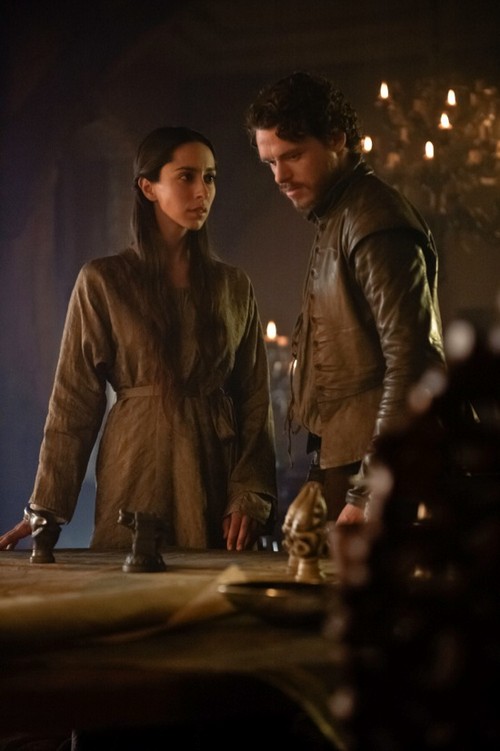 GAME OF THRONES airs tonight with a whole new episode called, “Kissed by Fire” and I cannot wait, the show is really heating up and can you believe after tonight we will be half way through the new season? On tonight’s show Jaime is judged by men, Jon proves himself; Robb (Richard Madden) is betrayed. Tyrion learns the cost of weddings.  Did you watch last week’s episode? We did and we recapped it here for you!

On last week’s show we found out that Vary’s and Lady Olenna Tyrell were as thick as thieves, they both have a common goal, to save Sansa Stark.  They hatched a plan to marry Sansa off to Lady Olenna’s grandson, Loras. We did not get to see much of Jon Snow last week but there was a death in the Night Watch, and as we predicted the Lord Commander was killed.  He was not killed by a Wildling, he was killed by Rast, a member of the Night Watch.   Daerney got her 8,000 unsullied slaves and she did not not lose any dragons.  Cersei was not pleased with Margaery’s influence on Joffrey and expresses as much to her father, Tywin.  Loved when Tywin told her she was not as smart as she thought.

On tonight’s show considering the title of the show “Kissed By Fire,” I am certain we are going to see the Wildling Girl Ygritte.   The title is a phrase used by the wildlings to describe people who are red-haired. Ygritte is described as “kissed by fire”.  Robb Stark gets betrayed, his allies and the family of the women he was pledged to marry are not happy he married someone else.  That is going to come and bite Robb.  Lord Tywin meets with his children, Cersei and Tyrion and Tywin wants to stop Lady Olenna and Vary’s plot to marry Sansa to Loras.  We all know that Sansa is the key to the North.  The Hound (Rory McCann) is judged by the gods; Jaime is judged by men. Jon proves himself; Robb (Richard Madden) is betrayed. Tyrion learns the cost of weddings.

The Hound and Beric fight is out, Eric’s sword is on fire as he aggressively attacks the Hound and the people chant guilty, guilty.  Things do not go well for Beric and the Hound kills him.  Arya grabs a knife and tries to get to the Hound.  They hold her back and she screams for the Hound to burn in hell.  She is told, he will, but not today…

Over with the Wildlings, Giantsbane asks Jon what he knows about the Crows patrols.  Jon Snow tells him what they want to know.  Giantsbane threatens to pull Jon Snow’s guts out through his throat if he lies to him.

Jon is pissed because Ygritte jumped to his defense.  She explains she had to and grabs his sword for her reward.  She runs down a cave where water is running and there are pools of water.  She tells Jon that she wants him to prove he is not a crow, she wants him to break his vows with her.  She strips naked.  He tells her they should not, but they embrace and start to kiss.  They end up making love, Jon has broken his vows.  He tells Ygritte she is the first women he has ever slept with.  She tells him she has slept with other men and starts to tell him the men she has slept with but Jon cuts her off, he does not want to hear her list.

They decided to take a bath together.  Ygritte tells him she does not want to go back she wants to stay in the cave with him forever.

The Hound tells the Brothers without Banners  he wants his gold.  Arya does not want them to let him go, because he is a murder.  Arya is told they have to let him go.

Jamie falls to the ground and Lord Bolton orders them to be take Jamie to the healer.  The healer tells Jamie that the infection is spreading and it might be better to cut off his whole arm.  Jamie tells him NO, the healer agrees to try another method where he cuts off the infected flesh.  He offers Jamie milk of poppy, Jamie refuses and says if he has pain he will scream.  He screamed a lot!

Cersei comes to see Lord Baelish, and she tells him that he believes the Tyrells are plotting something.  She asks Lord Baelish to check into it and find out what they are up to.

Lady Olenna Tyrell is having a conversation with Tyrion and he tells her the Royal Wedding is getting to be very extravagant.  Tyrion tells her they are at war.  Lady Olenna reminds her of all the contributions the Tyrells have made.  At the end of their coversation Lady Olenna agrees to pay 1/2 the wedding cost.

Gendry tells Arya that he is going to stay on with Brothers without Banners as a smith.  Arya tells him he does not have to stay.  Gendry tells her he wants family and Arya offers to be his family.

Rickard Karstark breaks in where Jamie’s men are holding the Lannister nephews hostages and kills them.  Robb asks why he murdered the young squires.  Rickard says for revenge.  Robb accuses Rickard of treason.  Rickard mocks Robb and tells him he can scold him.  He then tells Robb he will be called The King Who Lost The North.  Robb orders the men be taken and hung.

Robb’s mother Caitlyn and his wife warns Robb that if he kills the Karstark the Karstarks will not be loyal anymore.  She suggest he keep Rickard hostages to keep the Karstarks loyal.  Robb refuses to listen and cuts Rickard Karstarks head off himself.

Back with the Brothers without Banners they explain to Arya why they had to let the Hound go.

Lady Selyse is praying to the Lord of The Light, and Stannis comes in.  She tells him he is the finest man she has ever know and he will be successful.  Stannis tells her he has shamed her and sinned.  Lady Selyse tells him she knows, Melisandre told her.  She is creepy – she has her dead baby boys in bottles that she talks too.  Stannis tells Lady Selyse he wants to see his daughter, Shireen.  She tells him she is not stopping him, he goes into the room and there is the little girl.  One side of her face is disfigured.

Shireen tells him that she heard he was in a battle and she wants to know if the Onion King is back.  Stannis tells Shireen that the Onion King/Sir Davos is a traitor and he is in the dungeon.  The little girl is upset because Davos was her friend.

Jamie comes in and Brienne is talking a bath, he tells her to get out he needs a bath.  There is another tub but he is insisting to get in the tub with Brienne.  Brienne curls up in the corner and Jamie tells Brienne not to worry, she is not his type.  He makes a few nasty comments and she stands up naked and mad.  Jamie apologizes for his comments and tells her, what he said was uncalled for.

Jamie start to tell Brienne about the Mad King, Aerys II Targaryen and how he liked to burn people.  He starts to recount his story about how Jamie’s father Tywin marched on the Kingdom and Robert Baratheon.  Jamie warned Aerys II Targaryen to surrender.  But the Mad King would not listen.  Tywin and the Lannisters sacked the city.  The Mad King commanded Jamie to kill his father and cut his head off.  He commanded his pyromancers to burn the city down and the people, he really was mad.  Jamie could not kill his own father so he killed the Pyromancer first and stabbed the Man King and then cut his throat.

Brienne asks Jamie why he never told Ned Stark why killed the mad king and why he not tell people why he killed him?

Stannis’ daughter, Shireen comes down to the dungeon to see Davos.  She brings him a book, Davos tells her he cannot read the book.  Shireen offers to teach him to read.  She starts her first lesson.

Daenery’s asks her unsullied warriors if they picked someone to lead.   They have chosen Grey Worm – Daenery’s tells the unsullied, from this day forward they choose their own names.  Grey Worm tells her that he is proud of the name Grey Worm because that is the name he had the day she made him free.

Sir Barristan and Jorah are speaking and Jorah makes it clear to Barristan that he does not take his orders from him.

Robb Stark tells his wife, Jeyne that his mother and her were right, the Karstarks are gone.  His wife suggests they march North and take back Winterfell from the Greyjoys.  Robb tells her that when they started the war they had purpose, now they are like bickering children.

Robb gets an idea, he will take Casterly Rock from the Lannisters.  He needs to get men to replace the Karstarks.  Robb tells Jeyne that he has to get the Freys on his side.  The Freys are the family whose daughter he was suppose to marry.

Sansa asks Maergery when they will announce that she is marrying Loras.  Maergery assures her soon.  Meanwhile we find out that Loras is gay.

Lord Petyr Baelish is meeting with a man who tells him that Loras will be married to Sansa.  That is what the Tyrells are plotting.

Tyrion comes to see his father and tells him that after one conversation with Lady Olena he has saved the crown a lot of money.  His father does not care.  He has other things on his mind.  He tells Tyrion that Lady Olena is planning to wed Sansa, who he believes is the key to the North to Loras.

He tells Tyrion he is not handing Sansa over to the Tyrells.  Tywin then anoounces he has to find Sansa Stark another husband.  Tyrion soon realizes his father wants him to marry Sansa Stark.  Lord Tywin, lets Tyrion know it is past time he was wed.  But Lord Tywin does not stop there, he drops a bomb on Cersei and demands that she marry Loras.  Cersei is furious and he lets her father know as much.  Lord Tywin makes it crystal clear to both his children, Tyrion and Cersei,  that they will do what he wants!

TO FIND OUT SPOILERS OF WHAT IS HAPPENING ON NEXT WEEK’S SHOW, CLICK HERE TO CHECK OUT OUR GAME OF THRONES SEASON 3 EPISODE 6 SPOILERS HERE!