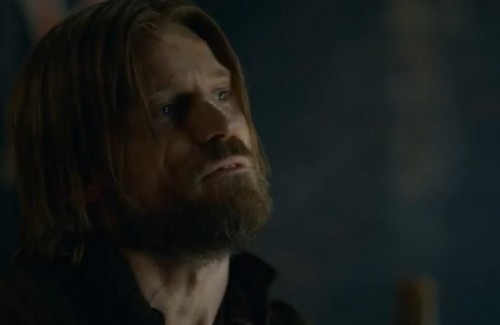 On tonight’s GAME OF THRONES the show just keeps getting better week after week.  Can you believe we are already half though the season?  Next week’s episode is called, “The Climb” and we have managed to get our hands on some juicy spoilers and a sneak peek video of next week’s episode.

On tonight’s show there was tons of action and a few shockers.   Rickard Karstark betrayed Robb Stark and rather than listen to his mother and his wife, he chopped off Rickard’s head losing the loyalty of the Karstarks.  Robb realized that when he started the war they were focused on the goal but now everyone was just bickering.  Meanwhile we Jamie and Brienne were brought to Lord Bolton.  They are being treated a lot better than the Brave Companions were treating them.  Jamie tells Brienne the truth about what happened and why he killed the Mad King.   Jon Snow broke his vows and slept with Ygritte.  Peter Baelish found out what the Tyrells were plotting and let the Lannisters know.  Lord Tywin was not pleased and decided to out manouver the Tyrells, much to the shock of Cersei and Tyrion.  There was a whole lot more that happened, did you watch tonight’s show?  We did and we recapped it for you HERE!

Spoiler alert: If you’re one of those people who doesn’t like spoilers, stop reading now! We have some juicy spoilers for you about the season 3 episode 6 HBO’s “Game Of Thrones.”

HBO’s Official Synopsis:  Tywin is going to plan strategic unions for the Lannisters. Melisandre is going to pay a visit to the Riverlands. Robb weighs a compromise to repair his alliance with House Frey. Roose Bolton is going to decides what to do with Jaime Lannister. Jon, Ygritte and the Wildlings will face a daunting climb.

On next week’s episode Robb realizes that without the Karstarks his quest to take the North will fail.  He comes up with the idea of getting the Freys back into the fold.  Small problem, he was suppose to marry the Frey daughter and dumped her.  He married Jeyne Westerling, slighting the House Frey.  Robb has a meeting with his mother, his uncle and his loyal men and tells them they will do whatever it takes to make the Freys happy.  He is told it is not what, it is who.

The Wilding are going to go over The Wall and Ygritte realizes that Jon Snow is afraid.  She accuses him of as much and he asks her if she is.  Robb, Ygritte and Giantsbane and the infiltration team start up the side of The Wall and he is told to stick his medal deep and if he falls not to scream.  The Wall is 700 feet high and is made of ice.

Brienne and Jamie have dinner with Lord Bolton and he tells Jamie that King Robb is keeping his father very busy and his father has no time for anything else.  Jamie reaches for a knife and Brienne discretely stops him.  Lord Bolton is trying to decided what to do with Jamie and Jamie assures Lord Bolton that his father will make time for him.

Poor Theon Greyjoy is still tied to the crucifix and he is told that if he thinks the situation is going to have a happy ending, he is mistaken.  He is still being tortured.

Hodor, Bran, Meera, and Jojen are heading north toward the Wall.  We have not seen Bran for a while but we will see him again next week as they get closer to the Wall.

I cannot wait until next week, check out the video below it is jammed packed with lots more action.  Also drop us a note and let us know how you are enjoying this season of Game of Thrones.

The Game Of Thrones Season 3, Episode 6 “The Climb” airs on HBO on May 5th, 2013. Check out the preview videos from episode 4 below and let us know in the comments below what you think!