BY Annemarie LeBlanc on May 19, 2013 | Comments: one comment
Related : Game of Thrones, Preview, Spoiler, Television 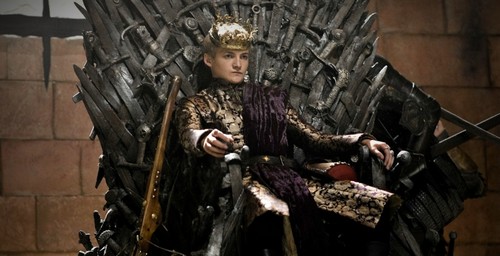 Tonight’s GAME OF THRONES continued with another great episode.  Next episode is the penultimate season episode and you know there will be lots happening so we can lead into another great season finale with lots of cliff hangers.  Next week’s episode is called, “The Rains of Castamere” and we have managed to get our hands on some juicy spoilers and a sneak peek video of next week’s episode.

On tonight’s show King’s Landing hosted a wedding for Tyrion and Sansa.   Tywin reminded Tyrion that it is his job to put a baby in Sansa. Tyrion and Sansa spend the night together after their wedding, Tyrion decided not to sleep with Sansa until she wanted him too.  Daenerys met the Titan’s Bastard and the Second Sons captains and he threatened Daenerys.  The Second Sons plot to kill Daenerys but one of the members Daario decided he does want to kill her and kills the other captains instead.  Daario pledged his allegiance to Daenerys.  The Hound has Arya and he is bring her to Riverrun to her mother and brother.  The Hound is hoping he will get a reward for her.  Melisandre has Gendry and she leaches blood out of him.  If you missed tonight’s episode you can read a full and detailed recap here.

Spoiler alert: If you’re one of those people who doesn’t like spoilers, stop reading now! We have some juicy spoilers for you about the season 3 episode 9 HBO’s “Game Of Thrones.”

On next episode the episode is named after The Rains of Castamere, the unofficial “anthem” of House of Lannister and Tywin Lannister, which refers to the destruction of House Reyne of Castamere after their rebellion. (see video of song below in second video)

On the next episode the marriage, between Edmure Tully and Walder’s daughter Roslin Frey, is an invitation which Robb cannot decline after already giving slight to his allies once.  So Robb heads to The Twins with his mother, uncle and a his banner men to meet Roslin Frey.

Robb tells his mother, Catelyn Stark that he wants to take his home, take his gold, take his power.  Catelyn tells Robb to show the Lannisters what it feels like to lose someone they love.

Jon Snow and Tormund Giantsbane are speaking and Tormund tells Jon that killing crows is what they do.  They have come over the wall and now are ready to attack.

Bran and Hodor are on their way to Castle Black to see his brother Jon.  It looks like Bran has a new gift and he will warf into Hodor next week.  Bran is worried that Castle Black is already under attack.

Meanwhile Jorah and Daenerys are planning how to take Yunkai with Daario.  Jorah is worried that Daario is leading him and Greyworm to be slaughtered.

Arya tells The Hound she is going to put a sword in his eye and not the back of his head.

It looks like on next week’s episode we will also be invited to the “Red Wedding,” at the castle of Walter Frey.  The Red Wedding is a massacre that takes place at the Twins and it does not end well for the Starks.  No doubt this episode and the Red Wedding will be the lead in to the season finale.

The Game Of Thrones Season 3, Episode 9 “The Rains of Castamere” airs on HBO on June 2nd, 2013. They are taking a one week break for Memorial Day weekend.  Check out the preview videos from episode 9 below and let us know in the comments below what you think!