Game of Thrones Season 4 Spoiler: Will A Zombie Return From The Red Wedding Massacre? 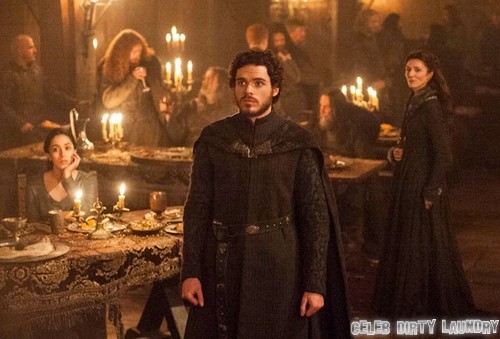 Well, the third season of Game of Thrones went off with a bang and while nothing’s really managed to top the impeccable quality of season 1, the Red Wedding caused a massive Twitter breakdown among fans of the show. But could the appearance of a zombie in the fourth season make it all better?

So we’ve seen that the show’s not afraid to kill off main characters. Well, the books weren’t afraid to do it first, but this means the show’s writers are more or less following the stories set by the book pretty faithfully. That’s good news for fans who love spoilers or who can’t wait another year to find out what happens – they can just go and buy the entire third, fourth, and fifth book.

Right now, Catelyn Stark and Robb Stark are dead and the rest of the Stark family is spread far and wide across the Westeros and beyond.  We all know that Catelyn Stark had her throat slashed by Raymund Frey at the Red Wedding.

But for those who have read the books, you will know three days after she was execute she was brought back to life by Lord Beric Dondarrion who used Thoros of Myr’s magic.  Unfortunately,  Lord Beric got to Catelyn too late and the magic was used too many times.  Catelyn’s wounds only partially healed, leaving her mutilated and without the ability to speak. She became consumed with the desire for vengeance over her family’s betrayal and murder. Revenge is all that is left to her.

She took the name “Lady Stoneheart” and assumed command of Lord Beric’s outlaw band, the Brotherhood Without Banner.

So for all intent and purposes she is a zombie. Well, I don’t know if you can technically call her a zombie, but she has risen from the dead, looks terrifying, but is in control of her facilities. She’s lost any vestiges of morality, and her only thought is to avenge her dead family. So I guess she’s a zombie with a brain? Or at least, a very strong purpose.

It’s a shocking moment, and I’m wondering if the show will be bold enough to include that towards the beginning of the fourth season, or if they’ll wait for the season finale to reveal her.

For fans of the books who know what’s coming, where do you think we will see this scene? Let us know your thoughts in the comments.