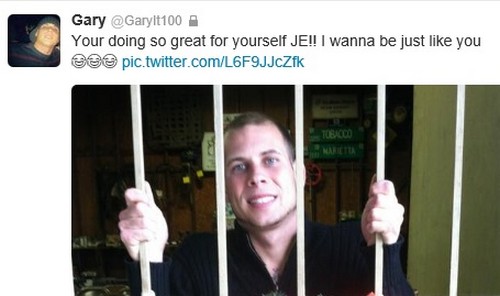 It’s no secret that Jenelle Evans and her ex-boyfriend Gary Head aren’t on the best of terms. In the past week she has accused him of “spying on her” and he has poked fun at her most recent arrest for a “breach of peace.” With their constant bickering back and forth on Twitter, we knew it was only a matter of time before one of them finally snapped. And, Gary Head just did. Here’s what he had to say to his pregnant ex-girlfriend, Teen Mom 2’s Jenelle Evans:

“Woah bitch!!! First off I’m not obsessed. Your god damn if you think I want you. You’re a mental train wreck & will NEVER get jace back cause your so immature and stupid that the courts won’t grant him to you. You live A fairy tale lifestyle where you LIE to yourself so much you don’t know what to believe anymore. On top of all that. U destroy everything & everyone around you. Boys don’t love you. We use the shit out of you bc you had thousands of dollars. You’re still married to Courtland , pregnant by Nate, & god knows who the other d—k is your f—g!!! You’re a waste of life. oh, I also forgot to mention you’ve been in jail over 20 in 2 years. Like What the F–k? Get back on your meds bitch URCRAY! The only thing I want for Christmas is for Jenelle to kill herself. Honestly I would go to her funeral to shit on her grave.”

Also, in the midst of his meltdown he commented on the recent speculation about the abortion she had. Jenelle claims that she has only had ONE abortion. But, according to Gary that is not the case. He tweeted this, “this is not the first baby she has killed. She should be called JE aka Fetus Killa.”

Ouch! That was harsh. So far Jenelle hasn’t responded to his meltdown, but a slew of Teen Mom fans have. Ironically, the majority of them are supporting his thoughts on Jenelle. Do you guys think Gary Head crossed a line?