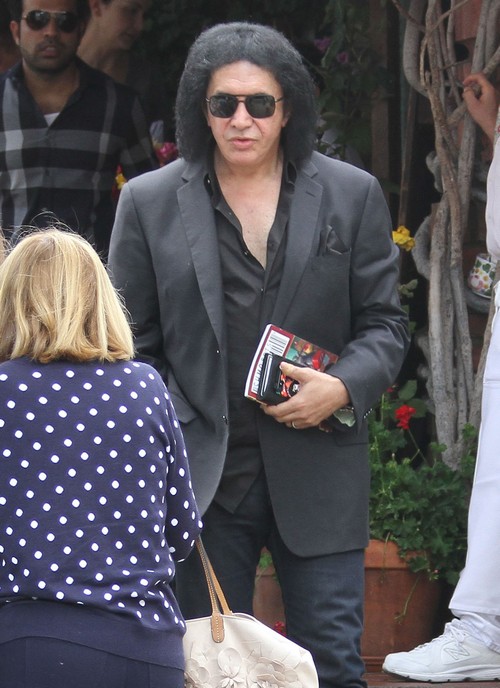 With the amount of evidence that has come out about Michael Jackson’s behavior with young boys, it’s surprising to me that there are still people who defend him. Nobody is denying that he was a great musician and a good father to his three children, but that doesn’t make him a saint. When there are so many people coming forward about molestation charges, it’s a stretch to call them all liars, and it sets a dangerous precedent for future child molestation cases involving celebrities.

Then again, nobody ever calls Michael Jackson’s fanatical fans sane. One such fan took issue with Gene Simmons’ comments about Michael Jackson being a pedophile.

To preface, Gene has previously commented on Michael’s pedophilia in an interview a couple of years ago, and he was brought into this by a supporter of Wade Robson, who asked him for his help via Twitter.  Wade is obviously the latest to step forward with complaints of molestation and sexual advances at Michael’s hands, and a supporter of his wanted to spread the word. However, a MJ fanatic after seeing the tweet, wrote, “Gene Simmons never even met much less knew MJ.”

However, Gene replied, “In 80s, i went out w/DianaRoss, we visited Michael Jackson. You don’t know me. Don’t make up things about me.” The fan that retorted, “Visiting is NOT the same thing as knowing! If you don’t want things made up about you, stop accusing Michael Jackson of being a “pedophile” as you did!!”

Gene then said, “FACT, He paid a family $22 million to settle one case. FACT, He paid $3.5 mil to another family. I stand by my words. Millions of people around the world believe he was. Difficult to believe. That does not mean it’s untrue.” As they say, ‘where there’s smoke, there’s fire.’

What side of the issue do you guys stand at? Let us know your thoughts in the comments.