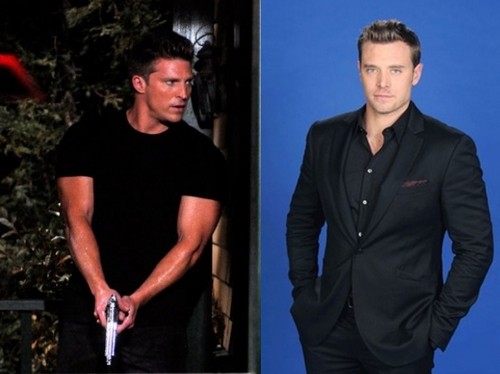 I’m a huge General Hospital fan and when Steve Burton who played mob enforcer Jason Morgan announced he was leaving the show to go home to Tennessee I was heartbroken as were many fans of the popular ABC soap.  Steven joined the show in 1991 and left in late 2012.

Shortly after Steve exited General Hospital he turned up on the Young & The Restless which left fans shocked.  Steve finally spoke out about his departure, “It was so many things that came together at once. Now that the real story has come out about how I left and that we were in talks for eight weeks to have me fly in, I think it was me more wanting to hang onto “General Hospital” then wanting to let it go. So obviously that didn’t work and I went to Tennessee and Jill – we tried to do a similar fly in deal at “General Hospital” [when she was the producer]. Even then, the schedule didn’t really permit it.”

Jason departed the show after being shot by Cesar Faison at the docks.  He fought for his life but when Jason suddenly stopped moving, Faison kicked him into the water by the docks, and he was presumed dead.  Of course in true Soap Opera fashion dead never really means dead.

With Jason’s character gone it left mob boss Sonny without an enforcer.  The show beefed up Shawn Butler’s role played by Sean Blakemore and he became Sonny’s new enforcer.  I like the role of Shawn but I never really felt he worked well with Sonny, he was just not a replacement for Jason.

I guess the powers that be saw the void that was left by writing Jason out of the show and now there are rumors that they may recast Jason.  A possible replacement is former Y & R actor Billy Miller.  Billy has been replaced on Y & R by David Tom so he is available for the role.  Billy can still be seen on Y & R until January 3rd, 2014.

Since it seems clear that Steve Burton is not returning to GH, a recast of the character makes sense.  It will be fun to see who Sam (Jason’s wife and mother of his son) chooses Jason or Silas (her current almost boyfriend.)  There will be several other possible interesting storylines:

What do you think of recasting Jason Morgan’s role with Billy Miller.  Will he be a good replacement?  Do you have other suggestions for who could replace Jason?  Hit the comments and give us your ideas!