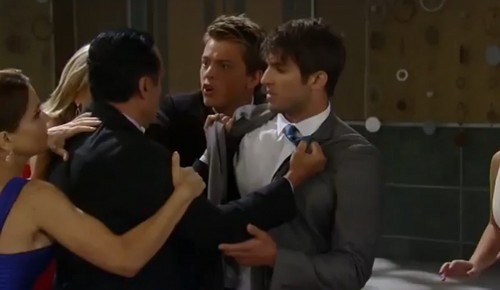 This week on General Hospital was a turning point for Morgan Corinthos played by Bryan Craig.  Although Morgan betrayed his father Sonny Corinthos played by Maurice Benard by aligning with the Jerome crime family, this is the first time Morgan has picked up a gun and committed a serious crime.

Last Thursday [12/19/13] at a shootout at Sonny’s warehouse Sonny and Shawn had guns drawn at Julian’s henchman Carlos who was holding TJ hostage.  Carlos was threatening to shoot Shawn’s young nephew TJ. Suddenly, Morgan came in with Julian Jerome both with guns drawn.  Sonny was shocked to see his youngest son with a gun, it floored him.  To save the day Max showed up and put a gun to Carlos head so he would released TJ.  Julian demanded that Sonny let Carlos go and when he refused Julian fired his weapon and more shots were fired.

On this week’s show Sonny tells Shawn to get TJ to safety.  Sonny then shoots Carlos.  Julian then orders Morgan to shoot Sonny. Morgan shoots his gun and rather than get Sonny he shoots Max! Anna gets a call about a shootout at the warehouse and when the police get there Sonny takes the blame for the shooting.  Some people are skeptical and don’t believe it was Sonny who did the shooting.  Dante is convinced that Morgan shot Max and tries to get him to admit it.  Morgan is neither confirming it or denying.

Will Sonny taking responsibility for his son’s actions finally prove to Morgan that his father loves him.  Will it help them fix their relationship? Morgan has to see now how much Sonny loves him and is true father – taking the rap for his son puts Sonny on the line for perhaps life in prison with his past record.  That is love and devotion.

After the shooting they took Max to the hospital and he is still alive.  Both his brother Milo and his former girlfriend Diane are at his bedside willing and wishing for him to live.  Will Max survive the shooting?

What about Carlos – Sonny shot him – where will he go – will he head to his former love Sabrina’s house for help?

This week is set up to be a fabulous General Hospital week.  So don’t forget to tune in to see what happens!