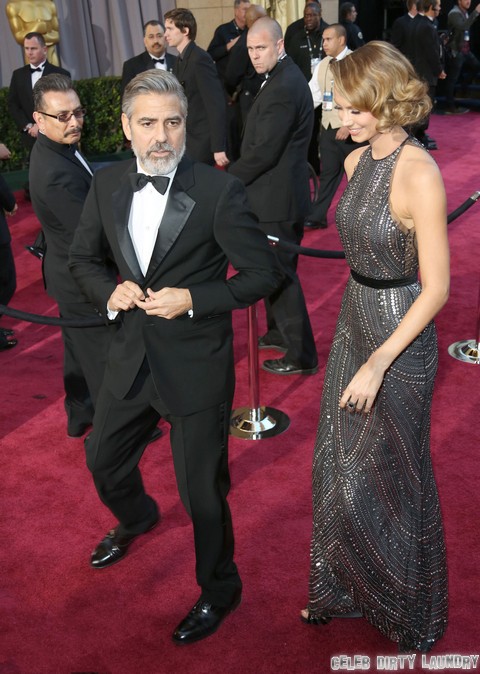 It looks like it’s time for George Clooney to do his spring cleaning and this year that includes unloading some heavy baggage in the form of ex-wrestler, Stacy Keibler.  Have you noticed that there is a pattern with George? He drops his current squeeze right after awards season and by summer is hot and heavy with a replacement. Anyway, these two were rumored to be struggling since last fall and for the same reason that nearly every other one of George’s relationships have failed.

Commitment. He reels these women in and they inevitably fall head over heels. He wines and dines and moves them into his Lake Cuomo estate and they are positive that the relationship is permanent. Stacy, like all of the women before her, thought that this was different. She would get him to settle down and have babies. Instead Stacy had an expiration date and the minute she started mentioning making things permanent the whole set up began to sour for George.

After an Oscar red carpet appearance a few weeks ago George finally pulled the plug, but not before giving his latest ex an apartment and loads of jewelry, according to The Sun.  Stacy’s career has stalled in the last few years so who knows, she may need to hawk that jewelry to keep her lights on!

Are you surprised to hear that George kicked Stacy to the curb? More importantly, who do you think will be his next piece of arm candy? Do you think that there is any taming George? He himself has stated that he believes marriage and kids just isn’t in the cards for him, so why on earth don’t these women listen to him?   Is he so charming that they simply forget his initial stance when the relationship began? Tell us your thoughts in the comments below!