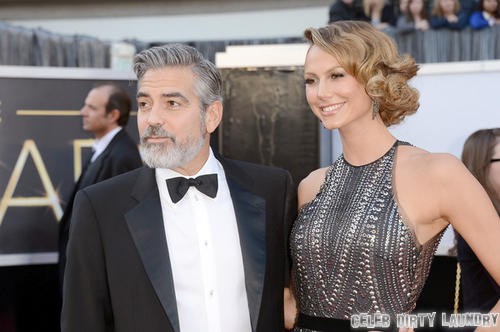 There have been rumors that have surfaced suggesting that George Clooney and his girlfriend Stacy Keibler are near the end of their relationship. Could it be true???

Not unless she has uttered the words “baby” or “marriage” in the past five minutes! Reportedly, George was just waiting for the right time to put an end to his relationship with Stacy. Reports suggested that she’s growing tired of his ‘older guy ways’ and wants to go out and party it up. What’s funny is that it sounds from the reports that she is just sick and tired of him…. Does she have a pulse?!?

An Us Weekly source said, “The party’s almost over for George Clooney and Stacy Keibler”, adding that the duo have “been butting heads during the last several months” and “their relationship has run its course.”

Another spy said, “They have little in common. She likes to go out and have fun. She’s been feeling the age difference.”

The magazine also makes the claim that Stacy is “dreading another secluded summer at Clooney’s villa on Lake Como.”

Uh huh. Because we’re totally sure she would be dreading that! Like we’ve said, if that’s true, does she have a pulse? Any woman in their right mind would love a little secluded time with Georgie Boy.

The reports go on to reveal that Stacy’s people aren’t blending well with George’s and that he was miffed when she brought some of her friends to an Oscars party at Craig’s in West Hollywood. The snitch added, “George’s friends resented that Stacy brought along several pals. George felt it was his night.”

Are you buying into the hype? George’s rep has already bashed the claims of any breakup, asking just who makes this crap up?