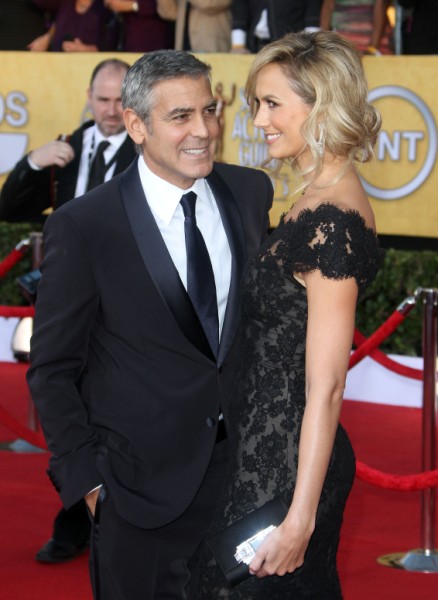 Stacy Keibler is not following the game plan. In fact, she’s being a straight up pain in the ass. George Clooney’s girlfriends are supposed to serve their purpose and then go away quietly. There should be no confusion, no tabloid bashing and, worst of all, no sex life talking. So either Stacy’s extremely hurt or the silly girl is sadly mistaken because her latest comments are forcing George’s people to defend his actions. Whatever happened to being grateful and moving on?

At first is sounded pretty textbook. The couple’s reps issued news on the split and gave the obligatory “Stacy thought she could change him but he doesn’t want marriage or a family” reasoning. Done and done. But then yesterday Us Weekly ran the story about how George hasn’t banged her in months. Obviously, this came from her side and was most likely meant to damage the ego. Was Stacy trying to do what none have done before her and gain the upper hand in a George Clooney split?

Well the Oscar winner shot down that idea right quick. A source told Page Six today that George not only broke up with her three weeks ago but told her to move her ass out over the phone. Apparently he couldn’t be bothered to tell her to her face since he was in Europe at the time. But that’s how he rolls and he’s never said any different. Stacy’s misstepping here if she thinks the millions of women that adore George are going to take her side in this. We all know we have no chance with Gorgeous George and we tolerate his side pieces because we know they have no chance with him in the long-run either. You got your time in the spotlight and your new reality show, Supermarket Superstars, and reportedly made $10 million in promotional fees while dating the A-lister. I’m OK with this and she should be too, right? Or I am just a heartless biotch this morning regarding the George Clooney/Stacy Keibler demise? She should buck up. Elisabetta Canalis rebounded with Steve-O so there’s always light at the end of the tunnel.