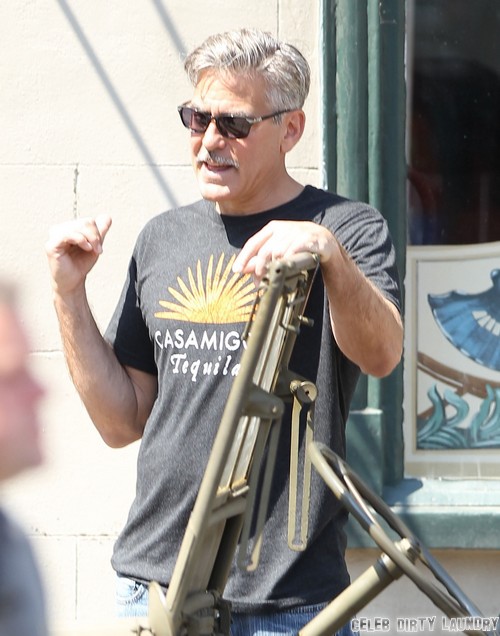 The Ocean’s star gets bored easily. The minute a woman is comfortable enough to remove her spanx, makeup, and hair extensions, she’s out. George adores the fantasy of falling in love, but rejects the energy and effort it takes to make a relationship work. Clooney feels like life should imitate art, he wants the girl in the movies. He hasn’t been photographed with the ex wrestler, Stacy Keibler, since March. The ER alumni is such a gentlemen. He wouldn’t ruin Stacy’s Hollywood position until she’s at least stable in her new career. Announcing their breakup would cause her to be rejected by her Hollywood peers. Plus, she sucked really hard for that position.

Stacey’s new show must be embarrassing George to no end – “‘Supermarket Superstar‘ With Host Stacy Keibler Debut’s July 22 on Lifetime” reads PW Insider’s headline.  Supermarket Superstars??? Stacey had to know that taking this job would mean the end of her relationship with George.  The man who dines with President Obama doesn’t date a Lifetime reality TV host, right?

George was spotted in Italy taking in fireworks with his rich American friends celebrating Independence Day. Stacy flaunted Instagram photographs of her partying in Malibu (pretending to be happy) with fellow Z list unknowns. Sources claim “She isn’t in Italy because she is working and shooting in New York and then doing a ton of press for her new show which launches on July 22.”