George Clooney and Stacy Keibler’s Open Relationship – They Both See Others! 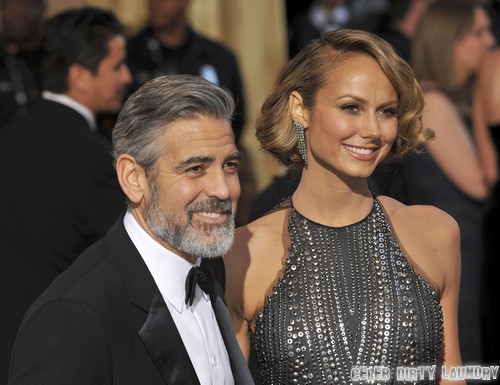 Wow, Stacy Keibler must be quite a bit different then the women that George Clooney typically dates. By different I mean a bit unstable. Usually somewhere around the 18 month mark George gets uncomfortable with whomever he is dating. At that point he either needs to step up and perhaps commit a bit or else end it and George is certainly not looking for a wife so he always pulls that plug. Except with Stacy.

Instead, according to the June 23rd print edition of Star Magazine, he has opted to still see Stacy occasionally – not because he really wants to, but because she can’t handle him ending things completely. So instead George is weaning Stacy off the idea of them being together. He was spotted out holding hands with ex, Monika Jaksic and that really seemed to push Stacy’s buttons. Instead of realizing that she is trying to cling to a guy who is over her, she decided to take the high school approach.

Stacy was spotted in a heavy duty public make out session with a mufti-million dollar banker at the SLS Hotel in L.A. She tried to one-up George and make him jealous but instead looked like a pathetic whore with precious little class. Instead of making George miss her she likely reaffirmed the fact that she’s not the woman for him.

Will George fall for Stacy’s childish ploy and decide he wants to make things work after all? I’m betting on no. She is just another hot chick that has reached her expiration date and for whatever reason, George just needs to handle her carefully, or he did until her big PDA moment. After that he may have decided that she paved the way for a nice, clean split! Tell us your thoughts on George and Stacy in the comments below!