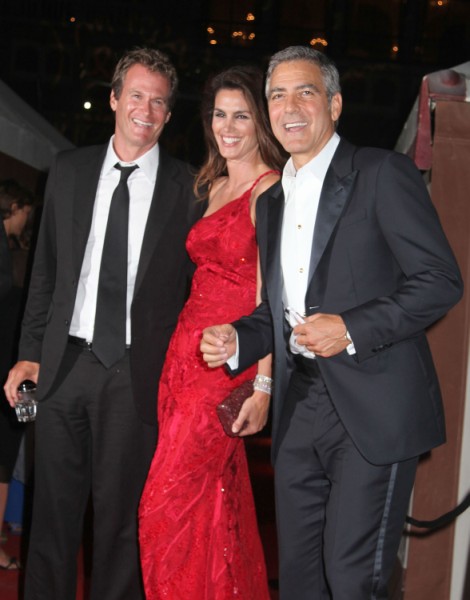 We all pretty much assume George Clooney has a thing for Cindy Crawford, right? It’s sort of a no-brainer. For starters, she’s Cindy Crawford so who wouldn’t? And then, save for Stacy Keibler, all of George Clooney’s girlfriends tend to look oddly like the supermodel. He likes ’em tall, skinny, brown-haired and game. But could there be more to this flirtation?

Page Six reported that George and long-time friend and Cindy Crawford’s husband, Rande Gerber, are going into business together. They have created their own house tequila and are ready to start bottling and selling – and marketing. Here’s where the awkwardness comes in. George and Rande shot a one-minute flick for Casamigos on location at one of Clooney’s homes, describing it as “loosely based on a true story.” It’s titled, “It Could Happen, Please Drink Responsibly.” On hearing that I figured it involved George hopping into Rande’s Porsche after one too many or some other rich people shenanigans but the guys aren’t swapping cars, they’re swapping wives. Apparently the flick shows the stars getting into bed in various couplings. I figured there would only be two odd couplings there – George Clooney/Cindy Crawford vs. Rande Gerber/Stacy Keibler but perhaps there’s also some Rande on George action as well.

So… if this is loosely based are we to gather that this busted up version of musical chairs happens all the time when these four get together during their many vacations together. Does George Clooney swing? How do you think Stacy Keibler likes that? She has to like it. If she’s not on board then the next girl will be. Trust. I’ve heard kinky things about George throughout the years and this really doesn’t compare to some of the crazy things whispered around so I’m not totally surprised. But I could just be assuming all over the place. George and Cindy’s relationship could be totally platonic. This commercial could be nothing but harmless fun. But still… it makes you wonder. I know what I believe! What about you?