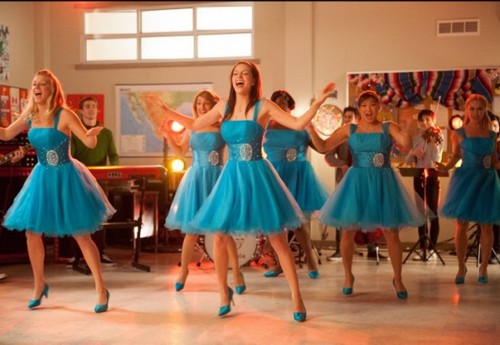 GLEE finally returns to FOX tonight with its winter premiere after more than one month Gleeks!  On tonight’s episode called, “Sadie Hawkins,” Sam is convinced that the Warblers cheated at Sectionals, and he makes it his mission to find the evidence.  Did you see the last episode before the hiatus?  We did and we recapped it here for you.

To catch you up on the last episode before the break, in an homage to the beloved holiday film “Love, Actually,” seemingly separate story-lines came together to form one merry GLEE episode. As the end of 2012 draws near, Sam and Brittany lived their lives to the fullest before the Mayan Apocalypse occurs.

Meanwhile, Jake and Puck spent quality sibling time together for Hanukah, Artie had a holiday dream that changed his outlook on life and Kurt had a Christmas he’ll never forget

On tonight’s episode the girls of the glee club organize a Sadie Hawkins dance at McKinley High, in which the girls ask out their dates, leading to interesting couplings among the members of New Directions. Meanwhile, Sam is convinced that the Warblers cheated at Sectionals, and he makes it his mission to find the evidence. Also, Kurt attempts to find his niche at NYADA.

Tonight’s episode starts with Tina heavily campaigning for a Sadie Hawkins dance. It doesn’t take much convincing to get it listed on the school calender and the guys instantly start tweaking, wondering who will ask them. Then they learn that when it comes to the New Directions, they’ll have to sing a song aimed at who they want to ask.

Tina tells Finn that she’ll sing I Don’t Know How To Love Him from Jesus Christ Superstar. She then steps up and asks Blaine to the dance. He stammers a big fat no thank you in front of the shocked class.  Meanwhile in NYC Kurt is trying to figure out what club to join to help him fit in at NYADA. Everything he considers is shot down by Rachel. He is contemplating one particular group that looks like where all the misfits have landed. He watches them perform a mellow version of Baby Got Back and I think there’s nowhere else he wants to be.

Running on the Sadie Hawkins theme allows all of the New Directions girls to perform a big production to Tell Him, complete with turquoise dresses. In the end Britney asks Sam to the dance and he agrees.  Blaine eventually tells Tina that he turned her down because he has a serious crush on Sam.

Quinn attempts to use sex to get to Jake but settles for Puck as long as he brings his “yarn ball of muscles” to the dance with him. Keeping with the role reversal thing, the guys from New Directions open the dance with a performance of No Scrubs.

Sam drags Blaine out of the dance because he claims he has proof the warbler’s cheated. Finn tells them that they still don’t have enough proof.

The New directions girls perform Locked Out of Heaven as the show stopper performance of the night and Marley doesn’t pass out. This time she shines and Jake is smitten. Kurt also gets the nerve to ask his new friend at NYADA out for coffee and is surprised that he accepts. He has been missing Blaine and is ready to move on in the love department.

The girls student council all agrees that the Sadie Hawkins dance empowered them and Tina did a great job. Tune in next week for more Glee!