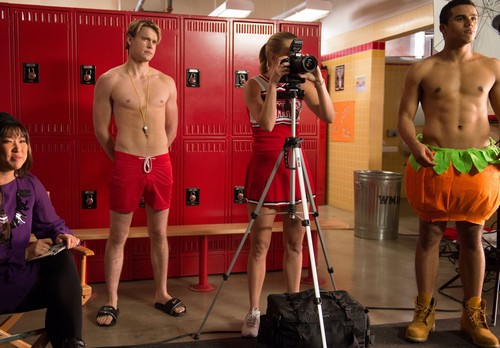 GLEE finally returns to FOX tonight Gleeks! On tonight’s episode called, “Naked,” Rachel wins a part in a student art film, but the role poses a moral dilemma. Did you see the last episode before the hiatus? We did and we recapped it here for you.

On last week’s episode the girls of the glee club organized a Sadie Hawkins dance at McKinley High, in which the girls asked out their dates, leading to interesting couplings among the members of New Directions. Meanwhile, Sam was convinced that the Warblers cheated at Sectionals, and he made it his mission to find the evidence. Also, Kurt attempted to find his niche at NYADA.

On tonight’s show the glee club puts together a calendar photo shoot to raise money as they head into Regionals. Meanwhile, Rachel wins a part in a student art film, but the role poses a moral dilemma.

Tonight on Glee the New Direction’s decided to pull together a shoot and put out a calendar to raise money for Regionals. Of course good ole reliable Tina is in charge of the project. Rachel is also offered a role in a NYADA production but she’s morally conflicted and launches into a great rendition of Natalie Imbruligia’s Torn before deciding to take the part.

Sam shows up for the calendar shoot Baywatch style ready to show off every inch of his muscles. He then has the crew meet him in the locker room so he can help whip everyone into shape. This ends up being another great mash up with the old J Giels Band’s Centerfold and Nelly’s Hott In Here.

Rachel gets to the student film set and when it comes time to drop the robe she can’t go through with it. The director is mad because she waited til the last minute but Rachel doesn’t care.

Tonight’s show ends with a group number to a song about new beginnings. Tune in next week to see if that Sue Sylvester issue of Penthouse ever shows up!