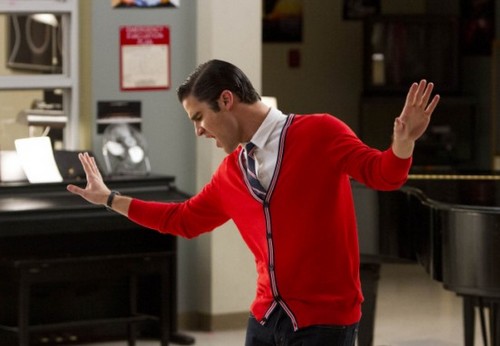 GLEE returns to FOX tonight Gleeks! On tonight’s episode called, “Feud.” On tonight’s show Santana becomes increasingly suspicious of Brody’s side job.  Did you see the last episode before the hiatus? We did and we recapped it here for you.

On last week’s show as everyone recovered from Will and Emma’s wedding, the glee club was given the assignment to sing their favorite song from a movie. Meanwhile in New York, Santana made herself at home in the loft a little too quickly for Rachel and Kurt’s comfort. Also, the members of New Directions sang the hit series’ landmark 500th musical performance.

On tonight’s show for the first time in glee club history, the students give the teachers, Will and Finn, an assignment to hash out the tension between them. Meanwhile, Santana becomes increasingly suspicious of Brody’s side job in the all-new “Feud” episode.

It’s feud week in Glee club and several of the club members are going to duel it out with fitting songs.  After Finn decided to kiss Will’s fiance a few weeks back things have been less than civil. In fact they’re downright ugly and the class suggests that perhaps a song and dance battle of epic proportions will be the best thing for these two. Will originally left Finn in charge of Glee club because he felt like he needed something extra in his life and the club would help him. Instead it brought Finn closer to Emma and well, we all know how badly that ended!

Santana has quickly made herself right at home with Rachel and she has already caught on to Brody’s shady behavior. Rachel thinks he has an innocent side job but Santana wonders how he can possibly be generating so much cash. I wonder when Rachel will catch onto the fact that he’s a male escort.

While we’re talking about mega feuds it probably makes a dump truck load of sense that Glee would choose to do an Elton John and Madonna mashup. The two superstars feuded for over a decade before agreeing to let it go. Bitch Is Back/Dress You Up is a pretty genius combo, even I have to admit.

Sue has decided to take on a Nicki Minaj and Mariah Carey battle and she is using poor Becky as her stand in. Nothing like looking at a Nickiesque blonde wig on Becky (glasses on of course) as Sue gets the Nicki gangsta lingo down.

It looks like Miss July’s Fosse style class has paid off. Santana shows up as Brody is teaching and takes over. She tells him that she’s on to him and that pretty soon Rachel will be catching on as well. She and the Fosse chicks bust out a cool version of Paula Abdul’s Cold Hearted Snake. It is seriously better than the original video and it wraps with Santana telling Brody to pack his bags.

Back at the school Will and Finn decide to battle it out boy band style. Will’s group tackles N Sync’s Bye Bye Bye complete with Marionette strings and Finn takes a more subtle approach. He and the boys  groove to Backstreet Boys I Want It That Way.

Rachel and Curtis are waiting to talk to Santana when she returns. She confirms that she talked to Brody and that he’s a sleaze.

Blaine tackles I Still Believe with a rasta twist as Sue Sylvester throws on a pink dress and blonde wig, complete with flourescent lipstick to perform Super Bass.

Marley stops in to see Finn as he is packing up getting ready to leave the school for good. He feels like he doesn’t belong there any more and she totally disagrees. She tells him that he needs no ones’ permission to stay and encourages him to get his teaching degree because he belongs in that position.

I guess there is actually a kind of sort of happy ending here. The New Directions realize that they need to put aside their differences and work together to win regionals.  True friendships get tested and the real ones will pass. Because Blaine lost to Sue he has to be on the bottom of the cheerleading pyramid, little does she realize that he purposely lost in order to get closer to her. The plan is to get the inside dirt on Sue so that she can be ousted once and for all.

Santana arranges to hire Brody as an escort for the evening. He shows up at her hotel room and is stunned when he realizes it’s her. Santana doesn’t want to hear anything from him, she tells him to save the girl talk- for Finn. Finn walks in and pummels Brody before telling him to keep his hands off of his future wife!