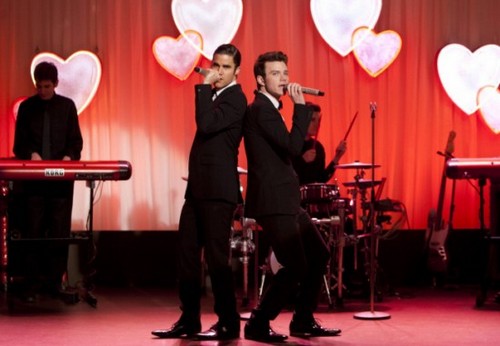 GLEE returns to FOX tonight Gleeks! On tonight’s episode called, “I Do.” On tonight’s show The former and current members of New Directions reunite in Lima to celebrate.  Did you see the last episode before the hiatus? We did and we recapped it here for you.

On last week’s show Finn challenged the glee club to find their inner powerhouses for “Diva Week.” Meanwhile, in New York, Kurt could no longer take Rachel’s arrogant attitude and called her out, causing tension between the two friends. Also, Emma was in a whirlwind preparing for her upcoming wedding.

On tonight’s show it is Valentine’s Day and love is in the air tonight. Will and Emma’s wedding is finally here, and it lands on the day of romance and love: Valentine’s Day. The former and current members of New Directions reunite in Lima to celebrate.

Kenny Rogers & Sheena Easton’s “We’ve Got Tonite” is sung by Rachel, Finn, Kurt, and Blaine, Ellie Goulding’s “Anything Could Happen” is sung by the New Directions and Marvin Gaye & Tammi Terrell’s “You’re All I Need To Get By” is performed by Jake and Marley.

It’s Valentine’s Week on tonight’s episode of Glee and love is definitely in the air. Will and Emma are preparing for their big wedding day and Mr. Shue decides that the best way for the New Directions to be a part of the fun is to celebrate Valentine’s Day to the fullest. Jake and Marley are really starting to heat up and they duet on the old classic You’re All I Need to Get By.

Rachel returns home to celebrate with the happy couple but that means an awkward reunion with Finn. He accidentally planted a kiss on Emma in the last episode and it’s a move that is stressing him out,. Emma is more OCD and jangled than usual and Finn feels horribly guilty.

As Emma is getting ready to marry Sue appears wearing a wedding dress nearly identical to hers. Sue sits back sipping champagne and munching strawberries while Emma freaks out about not getting married. She actually leaves the church and is driving away as her wedding march plays. Instead Sue strolls down the aisle in her place.

Will is left sitting on the floor of the church trying to figure out what went wrong. Emma’s parents already paid in advance for the reception so they decide everyone should go ahead and party for Valentine’s Day.

Kurt walks in to the reception and immediately goes toe to toe with Tina. She lambastes him for his treatment of Blaine and Kurt calls a spade a spade. He refers to her as a hag that is in love with his ex boyfriend. Finn decides to confront Rachel about her lifestyle choices. He tells her that he believes it doesn’t matter if she’s in NYC living with Brody, he knows that she is still in love with him. She keeps things casual with Brody because she can’t commit to him. She loves Finn. Rachel shrugs off the idea and tells him they need to do their duet before walking away.

Marley realizes that Blake spent the week helping Jake to spoil her and thanks him. He tells her it was all for real and then kisses her in the middle of the school hallway. She runs off quickly but I suspect she likes him. Finn approaches Will and tries to push him to cheer up. He insists that Emma needs her husband and that he’ll help him to find her. Finn’s also going to help him hold New Directions together. Tune in next week to see what happens with Emma and Will!