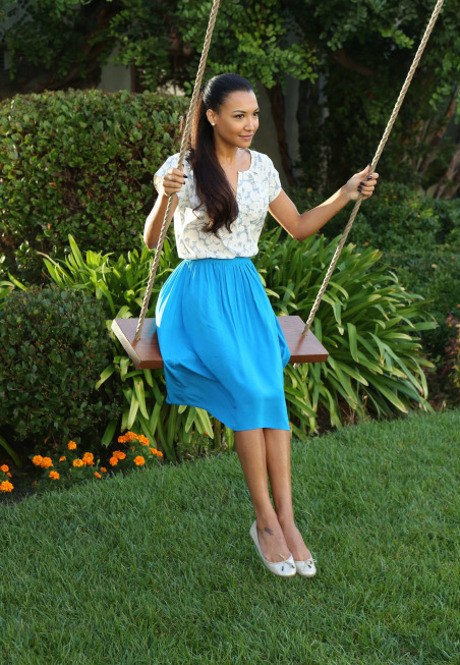 Glee will be returning tonight with it’s second episode in season 5 titled “Tina in the Sky with Diamonds.” We’re really excited to step back into our Gleek shoes and see where each of our favorite characters wind up this season, which we’re expecting to be amazeballs. So many things happened last episode: Blaine proposed to Kurt (and he accepted); Rachel continued to struggle with making her Broadway dreams come true; and Sue, now serving as principal, has taken over the school. Oh my! So much drama! If you missed last week’s episode, no worries, simply check out CDL’S live recap — CLICK HERE.

Tonight’s brief episode synopsis: Glee Season 5 Episode 2 “Tina in the Sky with Diamonds” – As Beatlemania continues at McKinley, it’s time for the students to vote for prom queen and king. When Tina receives a nomination, she takes on a fierce attitude that alienates her biggest supporters. Meanwhile, Rachel adjusts to a new attitude of her own, as she and Santana work at a Broadway diner to make ends meet.

Also, tonight will be the night when Demi Lovato makes an appearance; there might be some love in the air for her and Santana! What are you looking most forward to on this season of Glee? Let us know in the comments section below, and don’t forget to come back here later tonight at 9PM EST to get the run down/recap on what happened during this loveable show.

Prom everyone. Blane was nominated for Prom King and both Kitty and Tina got on the Queen ticket. Just earlier Sam was feeling bad for himself that he couldn’t go to prom with someone he really cared about but after hearing Tina’s nomination he got excited. That is until she dumps him. A potential queen can’t be seen arriving with him. She’s going to go in a group of girls to get the wallflower vote. It’s cold but she still counting on all of their votes.

Just as she was breaking into song the bell rings and everyone leaves. Tina may have her moment at prom although she won’t get any other chance to shine.

Santana and Rachel’s day in New York starts off well. Santana is having flirtatious moment with another waitress when Rachel brings her down by hating the fact she didn’t get the part. She wanted to make her hometown proud. Well Santana can do that. After all she’s the one that did a commercial for yeast. Rachel wants to be happy for her but it’s hard.

Kurt finds her at school being all depressed. He knows that’s not her and so he feels only song puller out of the funk and give her back some mojo. Applause was always her magic cure.

Kitty doesn’t want to campaign for prom. She figured she throw her vote behind Tina. Then her cheerios frienemies told her that she can’t allow Glee club to win a third time. If she won’t make her fellow cheerleaders proud then they’ll make sure she never makes it into prom nomination ever again. Kitty wants to continue backing Tina but when there are posters all over school for her- the whole glee club feel like she’s stabbing Tina in the back. No one forgot what she did during the Grease play.

Sam and Mr. Schuster found out from Principal Sue that there will be mandatory vaccinations. Sam is really scared of needles. He meets the lady you will be administering them. He caught her trying it out on a sausage. She then tried to use the same needle. Ah, no thank you! She’s not even a real nurse. She’s using this experience to get into nursing school.

Bu she is hot. Sam doesn’t want her to inject him and yet he’s willing to bite himself and pretend it’s a spider bite in order to get the opportunity to invite her to prom. There’s just something in the way she moves. Too bad she got fired. Sue found her incompetent. In order to convince Sue to let Penny stay he allows her to give him his shot. After that he got Sue to allow her to stay. Sue was already on the fence. Penny had confused aspirin with steroids and she’s happy she doesn’t have to find a new source.

The new waitress, Dani is definitely giving off a vibe. Santana doesn’t want to make the first move though. She’s scared and Rachel finds that hilarious. She arranges Dani and Santana to have some alone time by leaving the restaurant early. Apparently that’s what they needed. They got to watch the sunrise and sing “Here Come the Sun”. At the end Dani kisses her.

Prom arrived and Glee Club performs Beatle’s “Sergeant Pepper” to their awaiting fans. Tina arrives with all her hopes out in the open completely unaware the cheerleaders got to her assistant. Which wasn’t hard with the way she abusing the girl. They have a Carrie-style prank waiting for Tina. Slushes instead of blood.

Tina does win and just as she takes her moment in the limelight, Kitty notices something wrong. She never got enough time to warn Tina. The red slushes completely ruin Tina’s designer dress. Everyone begins laughing and an embarrassed Tina leaves the stage.

Her friends find her and want to clean her up but she wants to go home. Blaine convinces her to stay leaving the girls to get her back up to scratch. Kitty lends her own dress to Tina and they get her back out at prom accepting her crown.

Bri, the orchestrator, was brought into Sue’s office. Weirdly enough she doesn’t get punished. She got promoted. Sue did that because without her threatening them the Glee club won’t have a drive to succeed. Bri has Sue’s full permission to be a pathological as she likes.

Kurt got a job at the diner the girls were working at. They were all be optimistic about the future when Rachel hears she got the part in the play. In celebration later they all drink champagne with Dani as their guest.