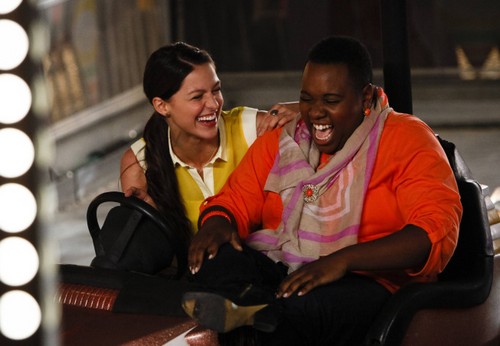 GLEE returns to FOX tonight Gleek with its fifth season premiere! On tonight’s episode called, “Love, Love, Love” Rachel’s New York ambitions take an unexpected turn.  Did you see the season finale of the last season?  If you missed it we have a full and detailed recap, right here, so you can get caught up.

On the finale it was finally time for Regionals, and the glee club was more determined than ever to advance to Nationals. The gang knew that they had to leave everything on the stage if they wanted to have even the slightest hope of winning. Brittany returned from her MIT trip with a new attitude and Ryder finally had a lead on who was “catfishing” him.

On tonight’s show the members of New Directions are back in action and take on their biggest assignment yet: the Beatles! As Will enlists the kids to pay homage to the classic song catalog from the Fab Four, Blaine and Kurt attempt to answer questions about their future together. Meanwhile, Rachel’s New York ambitions take an unexpected turn.

RECAP: The show starts off with Rachel singing a beautiful rendition of “Yesterday” by the Beatles. Will tells the club that they are going to be doing classic Beatles songs and he wants them to push themselves so they can win back to back nationals.

Artie and Kitty sing “Drive My Car”, but first he takes her for a little ride on his wheelchair. In the song they head to an amusement park and this girl sees them and takes a picture, then she instagrams it. Kitty tells Artie that maybe they could pretend to be dating, but you know he wants the real thing.

Rachel is working in a diner on Broadway, she is basically trying to be a working actress.

Kurt and Blaine talk about their relationship, Blane assures him that he will never cheat on him again and want to be boyfriends again. Kurt has prepared a song for their getting back together, he sings “Got To Get You Into Life”.

Sue is back and she doesn’t feel bad about being acting Principal and promises that this time she is going to get it right.

Artie is singing “You’ve Got To Hide Your Love Away” with Kitty, we see a look at the two in happy times and sad.

Blaine makes an announcement that he and Kurt are back together and he is going to ask Kurt to marry him and only Sam is excited about it. Blaine tells everyone that he wants everyone’s help in making the proposal more than just an ordinary proposal but a cultural statement. Blaine says that people are seeing that anything is possible and wants to put rival glee clubs beside each other to make this special. All of sudden, Blaine leads a rendition of “Help”. Blaine and Sam, along with some of the other kids run from club to club and enlist their help.

Tina approaches Artie and asks him if he is dating Kitty and he says sort of, well secretly because Kitty doesn’t feel comfortable about it.

At work, Rachel approaches these two guys and she tells them she is a star but they are not convinced and she breaks out singing “A Hard Days’ Night” to convince them.

Sue tells Will that she won’t fire him, as long as they make it to nationals.

Tina announces that Kitty and Artie are dating; Kitty admits it but tells everyone that is none of their business. Kitty explains that she didn’t want to explode her hierarchy before she was sure that she liked Artie and now she knows that she is. Kitty tells Artie that she likes him because he makes her laugh and she apologizes to him that she kept their relationship status a secret. Tina looks pissed that Kitty took it so well that she let the cat out of the bag.

Tina needs help, or so the guys think so because she is spending her time eating a lot of cakes.

Sue rubs it in to Figgins that he is doing janitorial duties. Sue has a bucket of spoiled meat slop and she kicks it over on to the floor, walks right through it and leaves it there for Figgins to clean up.

Sam, Blaine, Noah and another guy dress up in suits to loo like the Beatles and sing “I Saw Her Standing There”. Tina doesn’t understand why they did it, they tell her that they just noticed how sad she looked lately. Tina thanks the guys who offer to take her to the prom, she chooses Sam.

Kurt is on the way to his surprise proposal with his dad who is surprised that he knows about it. Kurt tells his dad that he is a little scared because he thinks they are so young. His dad tells him that he met his mother when he was 22 and they were scared as well. Kurt asks his dad if maybe he should have waited to marry his mom, his dad says no, ten more minutes with her and he would be happy. His dad tells him that Blaine asked for his opinion and his opinion doesn’t matter here, only Kurt’s opinion matters.

Kurt walks up to school and they are singing the song “Love”. Rachel grabs Kurt by the hand and leads him to Blaine and the same spot where they first met. Blaine proposes to Kurt who is just about to burst out in tears. Blaine gets down on one knee, pulls out a ring and asks Kurt to marry him. Kurt says YES.