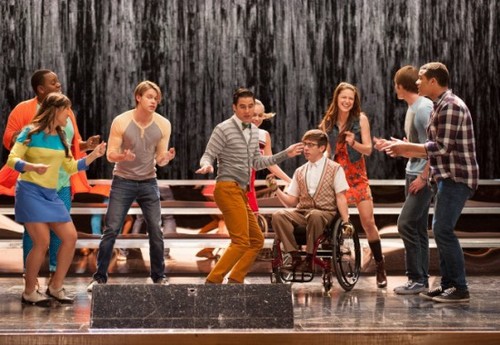 GLEE returns to FOX tonight Gleeks! On tonight’s episode called, “Lights Out.” On tonight’s show Isabelle Wright asks Kurt to volunteer at the Vogue.com charity event, with Rachel and Santana in tow in the all-new.   Did you see the last episode before the hiatus? We did and we recapped it here for you.

On the last show when the members of New Directions learned that the theme of this year’s Regionals was “Dreams,” everyone had his/her own opinion as to what they should sing. When Will learned that the theme for the upcoming Regional Show Choir Competition will be “Dreams,” he demanded a set-list comprised of 80’s songs none of the Gleeks were very happy about singing.  Meanwhile, the day had finally come for Rachel to audition for the Broadway revival of “Funny Girl.”

On tonight’s show When the power goes out at McKinley High, Will and Finn enlist the members of New Directions to “unplug” and perform acoustic numbers. Meanwhile, Isabelle Wright asks Kurt to volunteer at the Vogue.com charity event, with Rachel and Santana in tow in the all-new “Lights Out” episode.

In the middle of Mr. Schuester’s speech, he’s trying to motivate them for their next competition, the lights go out .  Instead of glee club doing stadium songs they now have to do unplugged.

Meanwhile Ryder is still upset about being stood up by his dream girl. When younger Puckerman asks him why; Ryder admits he told her things he never told anyone else.

Over in New York, Kurt and Rachel are trying to motive Santana into doing more than medial work. However right now she just wants to take time to think about her future. The future is quite a big question. After getting accepted into school, Kurt has been coming as often for his internship. Luckily for him his boss (Sarah Jessica Parker) wishes to keep him around because of quality over quantity.

Going unplugged is much more difficult than Glee thought it would it be. Sam, actually, is the one to tell them to snap out of it. He notices their dependency on tech when during his beautiful rendition of a an 80s classic, Artie was texting. But he what no one noticed was how Ryder still thinks Kitty was behind the secret texts.

Coach Sue Sylvester has become a workout coach. Using her same drive that got the Cheerios to championship, some of her clients are crawling away in pain. Surpisingly Blainn had joined the class. He knows that shooting wasn’t her fault or at least the full story.He asks her to come back and explain things. Also it wouldn’t hurt to get rid of the current cheer leading coach.

Artie got some inspiration for their unplug. He tells Sam how they should try no instruments at all but instead create their own.

Ryder is singing a song dedicated to his fellow glee members. This is his way to unplug all of his feelings. “Everybody Hurts”, resonates with everyone in their own special slushy filled flashbacks.  In order to pre-empt any rumors; he tells everyone his secret. He was molested by his babysitter when he was 11. Artie and Sam don’t get it. It’s every teen guy’s fantasy to have an older girl come on to you. The other members try to come to Ryder’s defense but he’s already lost his nerve and downplays what happened.
Kitty and Ryder go out to dinner together. Kitty wanted to tell him that she understood what she went through. She was molested by her friend’s older brother at a sleepover. She was eventually outcasted by her friend when she told people what happened to her. That’s why she switched schools.

Becky goes to Coach Sue. She begs Sue to come back but the coach claims she’s happier being a trainer. The coach can’t go back.

Santana, Rachel, and Kurt all go to an event hosted by Kurt’s job. The ballet brings back a lot of Santana’s memories of when she was younger. Right now she’s confused but Jane assures her that its ok to take her time to think about the future.

Becky gets in trouble with Coach Roz Washington. Becky used it as an excuse to speak with the principle.
The lights are back on. However Will wants everyone to remain unplugged for a little while longer. Ryder is still talking to “Katie”. He believes she’s helping him to open up and that’s why can’t give up on her. Even when a real life girl, Kitty, asks him out.

Santana has decided to take dance class. She had forgotten how much she had loved it.
Still unplug, the glee club come together for one last song. Everyone is enjoying themselves and Ryder can’t seem to see the looks Kitty has been throwing to him.

On next week’s promo, Blaine wants to propose to Kurt. Last we checked they were still broken up so I don’t know how that’s going to work. Also Kate Hudson returns to torment Rachel. Will she ruin Rachel’s big debut?