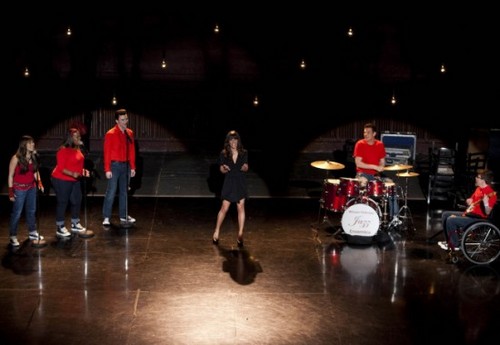 GLEE returns to FOX tonight Gleeks! On tonight’s episode called, “Sweet Dreams.” On tonight’s show the day has finally come for Rachel to audition for the Broadway revival of “Funny Girl.”   Did you see the last episode before the hiatus? We did and we recapped it here for you.

On the last show the members of New Directions were prepping for Regionals, but when an unthinkable event occured at McKinley High, perspectives are put into order in the all-new darker episode.

On tonight’s show when the members of New Directions learn that the theme of this year’s Regionals is “Dreams,” everyone has his/her own opinion as to what they should sing. When Will learns that the theme for the upcoming Regional Show Choir Competition will be “Dreams,” he demands a set-list comprised of 80’s songs none of the Gleeks are very happy about singing.  Meanwhile, the day has finally come for Rachel to audition for the Broadway revival of “Funny Girl.”

Marley Rose finally took the false bottom out of her desk, cracked out her songs and is ready to sing some of her songs.  Mr. Schue informs everyone that they are going to rehionals on a technicality and the theme is dreams. All songs will revolve around them. Marley rallies to do original stuff but is shot down.

Rachel has lived her whole life waiting for the chance to perform in Barbara Streisand’s role in Funny Girl. She has Babs memorabilia all over her desk and believes she has been groomed for this part since birth. Blaine thinks Mr. Schue has completely lost touch with reality because his set list is 30 years old.  Mr. Schue finally talks to Finn and tries to work things out. He wants Finn to come back and help him with the Glee club but Finn flat out refuses. Instead he has totally embraced college and all of the parties that it brings with it.  One of the biggest Sorority houses has asked him to join without even having to go through6 weeks of hazing.

Marley finally gets her shot to perform one of her songs- it’s called You Have More Friends Than You Know and the rest of the New Directions join in to sing it with her. Theywant her to do it for Mr. Schue but she says no way because he made it clear he’s not interested. Of course he was off in the wings listening to the whole thing.

Rachel calls Finn to talk to him about her Funny Girl audition. She needs to find the perfect song and he tells her to make the producers fall in love with her. She needs to pick the song that she most connects with. She decides to go with Don’t Stop Believing’. In her mind the New Directions are backing her and she lights up her audition.

Puck of all people talks sense into Finn. He tells him that he has to get his ass to class and he has to do well because being a mediocre teacher is not an option. Meanwhile Blaine and Becky are called into Coach Roz’s office and Becky acts suspicious. Blaine asks her if she had anything to do with the gun episode and Becky tells him to own his own gay business.

Finn decides to talk to Mr. Schue. He tells him that he wants to come back but needs to be treated like an equal, not a gopher. Mr. Schue agrees. He also decides that Marley gets to teach everyone one of her songs.

Rachel is talking to Kurt and waiting for her phone not to ring. As they talk an unknown number calls her phone It’s a producer and she got a callback for Funny Girl.