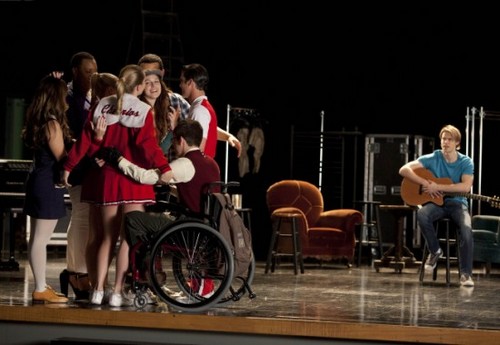 GLEE returns to FOX tonight Gleeks! On tonight’s episode called, “Shooting Star.” On tonight’s show the members of New Directions are prepping for Regionals. Did you see the last episode before the hiatus? We did and we recapped it here for you.

On the last show before the break the members of New Directions tackled their musical indulgences – the songs and groups that everyone is too embarrassed to admit that they love – in the “Guilty Pleasures” episode of GLEE.  The first guilty-pleasure song certainly deserved the title, “Wake Me Up Before You Go-Go” by WHAM!, sung by Blaine (Darren Criss) and Sam (Chord Overstrett).

On tonight’s show the members of New Directions are prepping for Regionals, but when an unthinkable event occurs at McKinley High, perspectives are put into order in the all-new “Shooting Star” episode.

Tonight’s episode is suppose to be darker than the usual Glee episode.  Accordng to Zap2It, “the disturbing aspects of the episode seem to come out of nowhere. You don’t get a chance to prepare.”  Yikes!

Tonight’s show begins with Brittany predicting that a meteor is about to hit the earth. Will decides to use her theory as motivation and he decides they will perform their last songs ever before the earth implodes.  Brittany and Sam go to visit Lord Tubbington- her cat-  because she fears that he’ll never know how much he has meant to her. Sam suggests she sing him his favorite song and Brittany thinks that is perfect.

Rider decides to finally meet Katie via song. He approaches her in the hall and drags her in to meet the band. He sings Your Song to her before realizing that he has been catfished. Someone has used her photo to chat with him, but it wasn’t her.

Brittany decides that her cats favorite song is More Than Words and has all of the New Directions perform it via candlelite while the fur ball watches. Luckily she realizes that the asteroid at the edge of her telescope is actually a ladybug and the world is safe. Brittany also shares a touching moment with Becky who is afraid to leave high school. Brittany tells her that if she prepares herself it’ll be ok.

Rider’s fake girlfriend texts him and apologizes. She tells him that she used a fake picture because she’s afraid he won’t like her but agrees to meet him the next day.

As the New Directions gather for a practice for Regionals what sounds like gun shots are heard ringing out through the hallway. Will locks down the room and the show takes a totally serious turn. Brittany is in the bathroom standing on a toilet waiting for the all clear. Meanwhile the rest of the class is curled up crying waiting for the all clear. They make videos saying their goodbyes in case they don’t make it out.

Rider decides to call Katie and her phone rings in the room so now he knows that she is one of the girls in Glee club with him.

Finally they get the all clear and the next school day is radically different with locker searches and security measures galore. Every student is being interviewed and the place is crawling with police.  Sue admits that it was her gun and that she simply felt safer with it in her office. She finds it ironic that she has had a great career and has helped educate amazing people but she’ll be remembered most for bringing a gun to school simply to protect herself.

he New Directions all realize how much they mean to each other. Tina and Blaine share an I love you and Sam buys Brittany a Lady Tubbington to go with Lord Tubbington. Will goes to confront Sue and she flashes back to what really happened. Becky brought the gun to school and told Sue she needed to protect herself.  Sue is taking the fall for Becky and it has cost her the job she loves.  Tune in next week for more Glee!