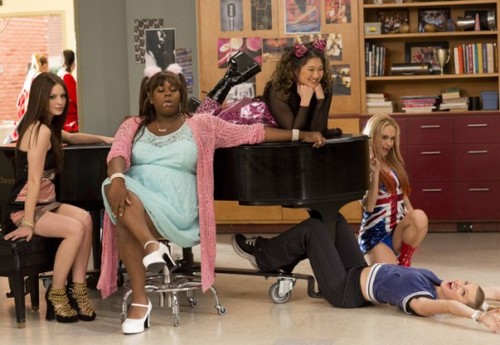 GLEE returns to FOX tonight Gleeks! On tonight’s episode called, “Guilty Pleasures.” On tonight’s show Blaine and Sam (Chord Overstreet) will take over New Directions after Will gets sick.  Did you see the last episode before the hiatus? We did and we recapped it here for you.

On last week’s show for the first time in glee club history, the students gave the teachers, Will and Finn, an assignment to hash out the tension between them. Meanwhile, Santana became increasingly suspicious of Brody’s side job in the all-new “Feud” episode.

On tonight’s show The members of New Directions tackle their musical indulgences – the songs and groups that everyone is too embarrassed to admit that they love – in the all-new “Guilty Pleasures” episode of GLEE.  The first guilty-pleasure song certainly deserves the title, “Wake Me Up Before You Go-Go” by WHAM!, sung by Blaine (Darren Criss) and Sam (Chord Overstrett)

Tonight’s episode is all about musical shame. The New Directions are picking their most embarrassing favorite songs to sing. The show begins with Blaine and Sam singing the old Wham classic, wake Me Up Before you Go Go because Blaine loves the band to pieces.  Curt is debating what to confess but knows he can’t share his real secret. He ordered a boyfriend arm so that he can curl up at night cuddled by another.

Santana and Kurt have made a deal about not telling Rachel that Brody is a gigolo. Santana and Rachel later decide to play a joke on Kurt only to find him curled up with  his boyfriend arm, now named Bruce. Sam admits to loving Barry Manilow and by the end of a meringue performance to Copacabana, nearly everyone else admits to being a “fanilow” too!

Rachel believes that she;ll get back together with Brody and so Santana decides to tell her the truth once and for all. Rachel is crushed as Blaine launches into his guilty pleasure, Against All Odds by Phil Collins. The girls found out that Jacob wanted to do a Chris Brown and flipped because of the million horrible things that he is. Jacob points out that it’s supposed to be a guilty pleasure and he feels guilty about liking Chris’ music.

No musical shame tribute would be complete without a Spice Girls song, right?  If You Wanna Be My Lover is lead by Kitty and kicks some serious butt. It’s followed by Jacob who has decided to do a song by Brown, but not Chris. Instead he cranks out Bobby Brown’s My Prerogative.

Oh my gawd. Tina’s guilty pleasure is Vicki the robot from a short lived 80’s show called Small Wonder. That may have been the worst show made in the 80’s. Meanwhile back in NYC Rachel confronts Brody about his male escort side business. He tells her that Finn is the one who destroyed his face. She admits that she hasn’t been honest and she used him to make Finn jealous and to fill something missing in her life. They part while singing Creep.

Rachel tells Kurt and Santana that she dumped Brody for good in an adult way. Tonight’s show wraps up with the New Directions singing an Abba classic, Mama Mia. Perhaps the guiltiest pleasure ever.