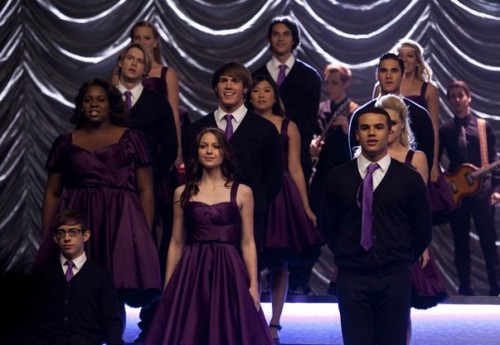 GLEE returns to FOX tonight Gleeks! On tonight’s episode called, “All or Nothing.”   On tonight’s show The time may have finally come for Blaine and Kurt to not only reconcile, but to solidify their relationship. Blaine recently asked for Kurt’s fathers blessing and rumor has it that this episode could include a surprise wedding.. Did you see the last episode before the hiatus? We did and we recapped it here for you.

On the last show it featured Stevie Wonder tribute songs and the return of Kate Hudson.  The members of New Directions took on the greatest hits of music icon Stevie Wonder. Meanwhile, Artie received news that could affect his future and his mom. In New York, Rachel prepared for her callback.

On tonight’s season finale it’s finally time for Regionals, and the glee club is more determined than ever to advance to Nationals. The gang knows that they have to leave everything on the stage if they want to have even the slightest hope of winning. Brittany returns from her MIT trip with a new attitude and Ryder finally has a lead on who is “catfishing” him.

Tonight’s episode begins with a Britney shocker. While she can’t pass a test to save her life MIT has reason to believe that she has the best mathematical mind ever and they are prepared to offer her a lucrative deal. At the same time the New Directions find out that Regional’s will be held at their school due to a weird turn of events. In other words the gang gets the upper hand.

Rachel is back in NYC auditioning for the role of a lifetime, Fannie Bryce, by singing a Celine Dion song. Kitty heads into see Coach Roz and informs her that she is quitting the Glee club. Rider has had enough with being catfished and he demands answers. Marley finally admits that it was her.

Britney has spent forever digging and finally she knows who the celeb father of Sue Sylvester’s kid is. It’s Michael Bolton who played a concert 9 months and 1 day to the day of her birth. Speaking of Britney, Sam is desperate to figure out why she’s acting so weird.

Rider wants to know why Marley set him up and in a twist Unique comes clean and explains it was her and that Marley was covering for her. Unique explains that it was all real on her end. Every connection that was felt was real. Rider disagrees and says they share absolutely nothing.

Blaine has decided to give Kurt the shock of a lifetime by proposing and while looking for a ring he encounters an older woman who has a longtime girlfriend. They end up taking Blaine and Kurt to dinner and make quite an impact. Meanwhile at Regionals Rider decides to show up but he tells Mr. Schuster that it’ll be his final performance with The New Direction’s.

The New Directions take the stage to perform their three songs for what is clearly their last regionals together and they kill it. After a dramatic year they win the title. An even bigger shock comes in the form o a wedding. Since everyone is already dressed Emma thought it would be the perfect time or an intimate ceremony between her, Will and the people who mean the most. They profess their love for each other before finally marrying.