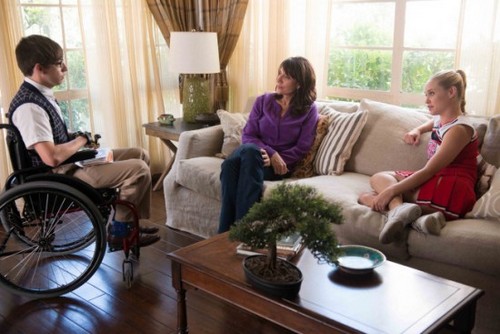 GLEE returns to FOX tonight Gleeks! On tonight’s episode called, “Wonder-ful.” On tonight’s show Artie receives news that could affect his future and his mom. In New York, Rachel prepares for her “Funny Girl” callback. Did you see the last episode before the hiatus? We did and we recapped it here for you.

On the last show when the power went out at McKinley High, Will and Finn enlisted the members of New Directions to “unplug” and perform acoustic numbers. Meanwhile, Isabelle Wright asked Kurt to volunteer at the Vogue.com charity event, with Rachel and Santana in tow in the all-new “Lights Out” episode.

On tonight’s show it features Stevie Wonder tribute songs and the return of Kate Hudson.  The members of New Directions take on the greatest hits of music icon Stevie Wonder. Meanwhile, Artie receives news that could affect his future and his mom. In New York, Rachel prepares for her callback.

RECAP: Rachel calls Mr. Schuster and tells him that she got a second call back for Funny Girl. Next week at regionals they will be on higher ground as this week is Stevie Wonder week. Artie gest accepted to the Brooklyn Film Academy. Kurt is going to the doctors with his dad who is going to get his cancer results.

Kurt goes back to the school and sees Blaine, then the Glee Club breaks out into “Signed, Sealed, Delivered”. Artie doesn’t want to college, his mom his freaking out at the thought of him going away.

Blaine sees Kurt and tells him that he looks cute, dirty cute. Blaine and Kurt say that nothing is going on between them, but they keep looking at each other hot and heavy. Cassandra is back and she found out that Rachel is going up for the role of Funny Girl.

Mercedes and Mile help the Glee kids practice for regionals with their version of “Superstitious”. Mercedes and Mike want to find their superstar, Jake.

Kurt is at the doctor’s hospital with his dad and he starts giving him a hard time about the color of shirt he is wearing. The doctor walks in and gives Kurt’s dad the news, he is in remission, the tumour is gone.

Kurt’s dad is at the practice and he sings a song dedicated to him, “You Are The Sunshine Of My Life”. Dad and Kurt share an endearing hug while Blaine looks on enviously.

Rachel is with Cassandra who lets slip that she knows about her call back. Cassandra says she found out from Barbara Streisand and will attend the call back with her husband, James Brolin, as well, just to watch Rachel fail. Oh and gets this, Cassanda changed Rachel’s final to the same day early morning so that Rachel has puffy eyes and is tired.

At Glee Club, chows everyone what he’s got with “I Wish” with Mike, but Mercedes is a no show. Mike and Kurt find Mercedes on the phone with her producer who wanted her to show a little cleavage in her photo shoot. He now tells her that he CD is on hold until she shows a little more skin, or they will use a model. Kurt tells her to let it go, she shouldn’t want to work with people like this. Mercedes is going to speak to her mom.

Artie is home, his mom is upset that he didn’t tell her about his acceptance to college. Artie tells her that he is afraid to go to New York so he blamed her that she didn’t want him to go so he could have an excuse. Artie says he doesn’t want to leave her alone and feels selfish in packing up and leaving.

Rachel is about to begin her mid-term, Cassandra surprises her and says that they are all going to help her so she aces her first Broadway call back, they sing “Uptight”.

Mercedes shares her experience with the Glee Club, she tells them that she spoke to her parents and her friends and she has come to a decision. She does not have a record deal anymore, but she does have lots of copies to give out and she knows what is coming “Higher Ground”.

Blaine goes to see Kurt’s dad, he gives him a gift to wear to support gay marriage. Blaine then says that he is asking for his permission, formerly, to marry Kurt because he is his sole mate. Kurt’s dad says that they are still kids and thinks they should learn from Fin and Rachel, straight or gay, it’s not the same as living together.

Rachel brought Cassandra a gift, Debbie’ Allen’s cane and she thanks her. Cassandra says she saw something in her the first day she met her and that is why she is relentless. Rachel tells her that she is so nervous and Cassandra reassures her that she knows she is going to get it.

Blaine takes Kurt aside, he tells him that he wants him to stick around for regionals. The Glee Club ends the show with “For Once In My Life”.