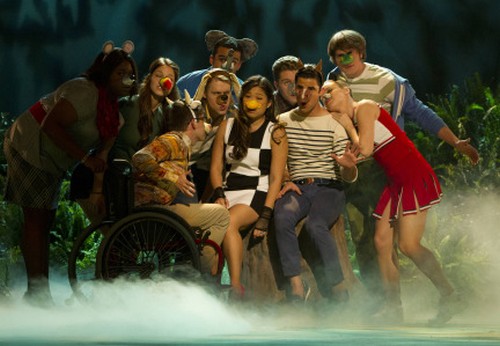 Tonight on Fox GLEE continues with a new episode called, “Puppet Master.”  On tonight’s show Sue reveals the story behind her iconic tracksuit and gets in touch with her feminine side.  Did you watch the last episode?  We did and we have a full and detailed recap, right here for you.

On last episode the New Directions paid homage to the Piano Man: Billy Joel. As graduation loomed closer, the seniors made plans for their futures beyond the halls of McKinley.

On tonight’s show Blaine believes he has the best plan to win Nationals, but he doesn’t take the glee club’s criticism too well when the students accuse him of being too controlling. Over in New York, Kurt also runs into control issues when the band disagrees over the venue of their first official gig that Kurt booked. Meanwhile, Sue reveals the story behind her iconic tracksuit and gets in touch with her feminine side.

RECAP: Blaine walks into the Glee club saying that Will is going to be stuck teaching because of the school board, Blaine tells them that the Glee Club needs to come up with ideas for nationals on their own until Will gets here. Blaine wants to sing lead because it’s his last chance. The Glee Club doesn’t want to do Blaine’s idea, Blaine is being a little Rocky at the moment. Jake says Acapella sounds good, Blaine gets frustrated with the Glee Club and decides not to help instead. Kurt enters his flat to speak with Eliot, Rachel and Satana about where they’re going to perform with their band. Kurt wants to do a gig somewhere, but everyone doesn’t believe that Call Backs is the greatest place. Kurt wants everyone to trust him, because of how great it seemed to him. It cuts to Kurt imagining what it would be like for his band to sing Into the Groove by Madonna. Kurt gets a call from Blaine, Blaine starts complaining how everyone at the Glee Club started “dissing” him after he tried to give help. Kurt then tells Blaine that he can’t be too aggressive because it’ll make him look like a control freak. Sue talks to the janitor about him doing his best, Sue wants everyone to be doing their best since the school board is going to be inspecting the school. Becky comes up and tells her they’re in the office, the janitor doesn’t look pleased. The school board asks Sue why she wants to become a principle, Sue says it’s because she’s born to take charge. Sue says that if the school board give her the school, she’ll make it the best. The school board says that they’ll come in next week and that they’re impressed. Harris mentions how Sue has a lot of trophies, Harris asks Sue if she’s married and Harris asks her if she’s free to have a beer. Sue asks Becky is she looks masculine, Sue doesn’t good about looking masculine. Sue tells Becky about why she wear the jump suit, and it was because of a comment someone made to her back in the past; one that the now janitor made about her. Thus began the transformation of Sue, into the power house principal she is now. The moment she put on the track suit, it made her feel powerful. Becky says that everyone is scared of her now and that she should grow up a bit. Blaine walks in and is scared by Brad, Blaine says that he’s having problems and Brad mentions his online poker problems and his house being taken away; but Blaine doesn’t listen and talks about his own problems. Blaine falls asleep and sees the Glee Club looking like a bunch of Muppets… Literally; it’s about everyone needing Blaine to save the day with a song. Blaine begins to sing You’re My Best Friend by Queen.

Jake is helping the cheerleaders with their choreography, in the end of their practice Jake says they all suck and need to practice more; Bree see’s the girls checking out Jake and him doing the same, turns out he’s go it going on with the whole team almost. Blaine tells Jake about what’s going on with the back corner in the room, Blaine tells him to sit there. Will says that with Jake’s help they can do great things, Jake then goes on saying that it would be a waste of time and he’s bored. Jake sits in the chair and begins dancing with the cheer leading team, singing Nasty by Janet Jackson along with Marley. The janitor wakes up Jake while he’s sitting in the chair, it was all in his head the performance. Blaine talks to his arts and crafts teacher if he can make a puppet of his fiance. His teacher gives him the okay. Blaine starts talking to his new Kurt puppet that he’s made. Sure is walking down the hall in high heels and falls over, Blaine sees this and helps her out while asking about her heels. Sue asks what’s with the puppet, she says she doesn’t want to see that in her hallway again. Sue talks about how the school board is going to be coming and she doesn’t need someone talking to a puppet in the halls and confiscates it from him.

Sue sees Will spinning in the Glee Club room, she walks in and Will ass her to not bother him because he’s at work. Sue asks Will for help with becoming more feminine to impress Bob Harris the superintendent because he thinks she’s a man. Will starts talking about Ginger Roberts about how she became feminine and strong, Will says that he’ll teach Sue to dance in high heels backwards for a deal of having $600 for the costumes for the Glee Club in nationals. Sue looks conflicted on her decision, Sue was sitting in the chair in the back corner that makes people day dream. It shows Sue dancing with Will singing Cheek to Cheek by Fred Astaire. Sue is woken up by Becky, Sue looks confused. Jake tells Bree to let it go because he doesn’t want a girl friend, Bree says she’s pregnant with his baby. Bree wants him to go to the doctors with her, he looks pretty meh about the whole ordeal. Blaine sneaks into Sue’s office and tries to steal his Kurt puppet back, Sue knew he’d come back and was waiting for him. Sue tells Blaine to put the puppet down and tells him to go into detention for the next week. The puppet on the desk moves behind Sue’s back, she looks at it and doesn’t notice it. Blaine calls Kurt and tells him he can get to New York because he’s been given detention from Sue, Blaine tells him he tried to steal the Kurt puppet. Kurt starts saying that he really needed Blaine to be there. Turns out the gig that Kurt got has no one in the audience expect for one elderly man.

Sue is talking to Wade, she says that she has never been all that nice to him; she mentions that she needs a makeover and needs Wade for help. Sue wants to look more ladylike. The janitor says that everyone must spend time in detention, with no talking or anything. Blaine says they could use this time to get to know each other, Becky doesn’t want to at all. Blaine starts daydreaming and sees Becky and Jake as puppets. Blaine is talking to the puppets and their telling him how great he is and everything. Jake asks Blaine to cover for him, because he has to go to the hospital; but he doesn’t tell Blaine what he’s doing. Bree tells Jake that she’s not pregnant and their not going to the hospital, Bree says that Jake is horrible person and won’t become a great father because of him being a playboy and she calls him toxic also.

Sue is showing the school board around her school, Harris comes up and speak to Sue and apologizes for not seeing her more feminine side. Wade gives her the look and Sue winks back. The janitor speaks about the gas leak in the room, Sue then says that she fixed that problem and she tells the janitor that she’s cutting his pay since it was his job and he didn’t do it. Sue is then told she can become a full fledge principle now, she asks Harrison to go on a date and he declines her. Blaine is sitting on stage talking to the Tina puppet, Tina finds Blaine talking to the puppet and she apologizes behalf of the whole Glee Club; she tells Blaine that he can do what ever he wants at nationals that he deserves it. Jake comes up and talks to Marley, he says that he misses her; he says that he messed up big time and knows that he be came a jerk, Marley says that she doesn’t want to get back together with Jake. Marley walks away, Jake looks like he has realized his mistakes and wants to become a better person.

Rachel is talking to the band mates of Kurt’s band, because of the failure that happened; now Kurt has gotten a better gig because the person who was watching them at the last gig was the right audience member to be there and he was the one who got them this new gig. Blaine sends a box to Kurt to says sorry for missing the performance, it turns out Blaine made puppets of everyone in Kurt’s band. Blaine apologizes to the Glee Club for being so bossy, Blaine rolls in a box to make a peace offering, puppets of everyone in the Glee Club. Blaine and the rest of the Glee Club being singing The Fox by Ylvis.